almost to 3 thousand followers already? This is amazing! Thank u to everyone supporting this account! pic.twitter.com/TUZwsNPKEw

A Twitter account has nearly 3,000 followers after only joining August 2017. How did it get so many followers in such a small time? By posting adorable pictures of Splatoon’s Marie.

Here are some of our favorite posts:

After a long day of working hard, nothing beats some well needed relaxing time with your favorite hobby! pic.twitter.com/DE7SHZzGyD

Hi friends! I'm home from work and I have a yummy snack! I hope everyone is having a wonderful Sunday! pic.twitter.com/bOSBLDCodU

splatfest time! Which team are you on? pic.twitter.com/kRx1wHfoYJ

Now that the splatfest is here, just remember: it doesn't matter who wins or loses! What matters is having fun and playing hard! Go get em! pic.twitter.com/UrHhAf7Ud6

Oh man, get some rest, take some vitamins and get well soon! Marie sends her best wishes! pic.twitter.com/W2yr7Q3jvb

I cant take new pics of Marie when Im at work because she isn't allowed to come along, but she doesn't mind as long as I bring home a Pepsi! pic.twitter.com/4cBf60NKLV

Do something fun today, like making a new friend! pic.twitter.com/tV5ijdb2lU

Good night friends! Thank u again for another great day! Get some rest and enjoy ur weekend- you earned it! pic.twitter.com/S0bh3Ml6li

when u finish a Pepsi, instead of throwing it away u can repurpose it into a comfy seat! pic.twitter.com/cYhhTC8BJ6

always remember to buckle up! pic.twitter.com/CYJ2Xp5PHS

words can hurt you know.. pic.twitter.com/trnL77P941

Don't be envious of others, instead be happy with what u have! pic.twitter.com/ZRoWig3pVT

When i see ppl being mean to my friends or promoting unwholesome content online pic.twitter.com/qESEYNj7rs

Hop in kiddo, we're going on a road trip! pic.twitter.com/OsbVUR0GBT

It’s no wonder the account has caught on so quickly. Some people are even joining in on the fun by creating their own photos of Plush Marie, which the account is more than happy to curate.

Reminder that everyone is always welcome to submit their own Marie pics to this account, either via direct message or a mention! pic.twitter.com/Ok0lBtBzHh

Here are some of the photos people sent:

@BlessedMariePic Well I got home from vacation to the most present surprise! pic.twitter.com/CnN8oMw1iY

@BlessedMariePic She found a new friend! He reminds her a bit of Judd pic.twitter.com/mcJ9Gfvbl4

In Splatoon, Marie is a pop singer/secret agent along with her cousin, Callie. The duo formed one of the most popular music groups in the world of Splatoon, the Squid Sisters, and are even the hosts of Inkopolis News. On the side, they fend off the Octavian forces threatening Inkopolis as secret agents. The official Splatoon wiki describes Marie as quieter than Callie and a bit more prone to sarcasm and complaining. However, she’s mostly laid-back while occasionally being grumpy, traits that are often displayed in the Blessed Marie Pics posts. After Marie and Callie split off into solo careers, with Callie pursuing appearances at variety shows and Marie pursuing solo concerts and even a career in theatre, the two started to grow distant.

Many have grown a preference for Marie over Callie, as evidenced by the fact that Marie’s team won during the final Splatfest of Splatoon.

While the duo was replaced by the equally endearing Pearl and Marina as the hosts of Inkopolis News in Splatoon 2, Marie played a central role in the single player campaign leading the player throughout the levels, with Callie making an appearance only at the very end. 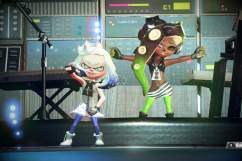