A Hat in Time, a 3D collect-a-thon homage by Gears for Breakfast, will finally be released after so long. But with so many great-looking games coming out this month, it can be hard to make room for a smaller game like this. So how much of your time will the game take up?

Destructoid spent 10 hours with the main story with an additional 5 or so hours if you want to grab all the collectibles and do various side-objectives and minigames. This is across the game’s five worlds. An additional two worlds are coming soon to the game.

The game also costs $29.99 and will be releasing on Steam on October 5 at 2 p.m. PT / 5 p.m. ET. PS4 and Xbox One ports are also coming later this fall. A Nintendo Switch version may come as well as dev kits were just recently released.

Either way, it sounds like it’s time worth spending. Destructoid gave the game an 8.5 out of 10, praising the game’s art style, music, and fun gameplay. YouTuber KingK praised the game saying it not only was comparable to games like Super Mario Sunshine and classic N64 platformers but even improved on some aspects of those games.

We’ll be sure to give you our thoughts as well as our completion time when we review the game. In the meantime, be sure to check it out for yourself. 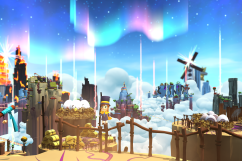 A Hat in Time: 5 Fast Facts You Need to Know

Read More
Games, PC Games
How long is A Hat in Time? Look no further.