Okay, the title will start some controversy. It’s true that everyone has their favorite game but some shine through with that little bit of extra. Battlefield 1 multiplayer presents a great case as one of the top games to play with your friends. It’s one of the most immersive, fun, and easily learned games out there. Especially when working together as a team. No ringers required to win and even a bad performance usually ends with the group in laughter.

There are several other games out there providing a great online team experience. Player Unknown: Battlegrounds is currently tearing it up, Fortnite as well, and let’s not forget about Destiny 2.

Those games and others; they’re all awesome and this clearly isn’t an argument against other popular video games. It’s a suggestion to try Battlefield 1. It’s a great game and it’s only getting better, with new expansions, all the time. Playing with your friends and talking makes it all the better. Also, life moves us all over and sometimes keeps us apart. World War 1 sounds the perfect thing to bring us back together.

Battlefield Makes Use Of Dynamic Squads – Putting You & Teddy Broosevelt Together

This is the war to end all wars; this isn’t Club Med. Join an all out battle, driven by courage and won with teamwork. It’s about sticking with your squad. Have you heard of that before in a shooter? Because a 12 year old sarcastically told me to stick with the group this morning.

In fact quite often someone gives a speech about how everyone needs to stick together, or do this. Only seconds before everyone runs their separate ways. “Teamwork means you complete the objective together, guys!” (whiney 12 year old voice) Objective? Oh you mean my objective: to run around, alone, and hunt the enemy with varying success.

That’s the typical experience in shooters. Sure you can kick up the teamwork with a little chat. You can even help captain the team to victory and make some friends along the way. Although, those games aren’t very common and voice chat with strangers is rarely a successful endeavor.

The thing that makes you successful in Battlefield 1 is your ability to respond quickly to the ever changing battle. Strategy must be flexible and coordination is king.

A coordinated infantry squad can change the tide of battle. Continually spawning off each other, reviving each other, and overwhelming an objective in moments. The squad and its leader are important to the success of any game type.

As squad leader, don’t forget to continually set objectives. Rally your team with attack orders or signal the defense a newly captured point. It will be the difference and if done well; it will earn you a ton of points.

Teamwork also goes for vehicles. Filling up a tank with your best friends is sure to go well. Everyone gets excited and is talking really loud in chat. Dave can’t focus and he gets stuck on a tree stump. The heavy tank spins its tracks, high centered and trapped like a flipped turtle. What’s that sound? Oh it’s 1,000,000 AT Rocket Gun rounds hitting the tank and it’s all Dave’s fault.

Tanks can be tough but planes seem even scarier. Don’t be afraid to practice flying and you will see planes aren’t scary. They aren’t; it’s just that simple. Piloting a plane with a tail gunner makes everything about flying so much easier. When its your closest friend along for the ride, you’ll surely find the chemistry needed to make it work. Soon you’ll be explosive and talented enough to rule the skies.

Combo your tail gunner with the powers of the squad leader. You can call out points for the pilot to bomb, making them easier to spot, all while keeping opposing fighters at bay. Drop in for strafing runs with your machine gun and clean up the opposing riff-raff on the ground.

The connection between friends in a plane will soon have you feeling like Pacific Rim. Get ready to punch aliens in the face!

Learn Your Friend’s Strengths, Weaknesses, & Grow Together As A Squad

You will learn everything about your friends’ play styles. You’ll learn if they’re reckless or overly cautious. Who’s a great sniper, a great healer, or a great squad leader, constantly calling out the objectives. The strengths and weaknesses of your squad will provide new excitement to the experience.

It also leads to some creativity in your gameplay; attempting things outlandish even foolhardy. Say like: running, a horse, down a trench, for a 15 kill streak. It was nuts or the friend that won’t stop using dynamite. It’s not a cleverly laid trap; it’s mean and it’s getting creepy.

You’ll also learn who’s a terrible pilot. Because when you hear, “uh oh” over the mic, as the tail-gunner, and crash into a cliff seconds later. It’s time to stop Dave from using vehicles or start making a blooper reel.

Enjoy the exciting gameplay, defend your teammates and work together. When they get run over by a horse; it’s time to run in and get revenge. Seriously though, enough with the dynamite. 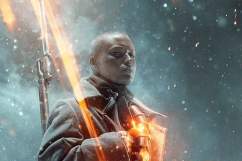