Friday the 13th: The Game has been out since late May but is still pumping out new content on a semi-regular basis. For quite some time now, the game’s official Twitter page has been putting out cryptic tweets with eight dots with one of them being blue.

The location of the blue dot changes depending on what tweet you’re looking at and it turns out this actually means something.

The developers have officially announced a new game mode being added to the game, free of charge, called Paranoia. Ironically, although we know what the cryptic messages are now, we don’t really know anything about this new game mode.

If we had to guess, we’re guessing one of the counselors isn’t really on your side and you’ll have to figure out which one is actually turning against you. There won’t be a Jason but instead one of the eight counselors will be your enemy. It sounds interesting enough if that is indeed the case here.

Many fans have speculated this basically be a game mode based on Friday the 13th: A New Beginning. In the fifth installment of the series, Jason Voorhees isn’t actually present since he *spoiler alert* died in the previous movie. Instead, the killer is a guy named Roy who methodically begins killing everyone at the halfway house.

We expect to hear more information about this mode in the near future. The development team has usually been pretty good about communicating with fans about updates and patches.

You can watch the debut trailer for the game mode below.

No timetable has been given for the update but we have to imagine it’ll be coming sooner rather than later if we’re seeing a trailer for it now. It’s possible it could be here in time for Halloween on Tuesday, although that doesn’t seem very likely but one can still hope.

In an update that is here for Halloween, players can purchase the Halloween costume pack which comes with a variety of skins for their favorite counselors. The pack is all yours for the price of $1.99.

Another future update is supposed to be arriving some time soon and that’s the addition of a single player mode. We were promised one during the summer when the game launched but summer has come and gone. The road map makes it seem like a single-player aspect will be here in either November or December. 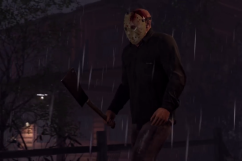