Smash Up – English TrailerSmash Up is the award-winning shufflebuilding card game designed by Paul Peterson, soon to be available in a beautiful digital adaptation so you can play on the go with friends all over the world. In Smash Up, players draft two faction decks from their choice of pirates, ninjas, robots, zombies, and more, and combine them to create a hybrid team that is a force to be reckoned with! ➤ http://asmodee-digital.com/en/smashup/ Follow us on social media! • Facebook: https://www.facebook.com/AsmodeeDigital • Twitter: https://www.twitter.com/AsmodeeDigital • Instagram: https://www.instagram.com/asmodeedigital2017-10-12T07:07:51.000Z

Here are the top nine tips/tricks/cheats you need to know for Smash Up – The Card Game (Mobile).

• Zombies work best in the discard pile so you want to get them there quickly. Mall Crawl will set up your discard with Tenacious Z’s, allowing for an extra 2-power minion each turn for the next several turns.

• Pirates are all about the surprise movement, though a very strong strategy, if you can set it up, is to get all your First Mates together. If they dodge your opponents’ bullets, you can potentially set off a chain of scoring bases, with an 8-power minion of yours moving from base to base.

• The ninja strategy is all about augmenting the partner faction. While the ninja have equitable power as others, they mainly work in the shadows to remove the opponents’ minions and then jump in to steal first place with a well-played Shinobi.

• The dinosaurs’ real strength is pure power. They lack finesse, so just pile on the power. Combine them with more subtle factions like Ninja to have King Rex suddenly leap from the rafters for 7-power swings.

• The aliens have a lot of tricks, but the most fun is to play Invader over and over for lots of extra victory points. Rather than returning opposing minions to their owner’s hand, do it to your own Invader. Combine with Zombies for even more chances to play him, or with Wizards to get your return to hand actions even faster.

• You want extra tricks? Look no further than the Tricksters. Aside from their annoying habit of destroying your opponent’s hand, they can combine their largest minion, Leprechaun, with power increasing actions, like those of the Dinosaurs, to essentially lock out a base.

• Much like the Ninja, the Wizards support the combo efforts of others more than win on their own. Their power is low but setting up the Archmage with some wizard actions that give more actions, you can chain together combo effects in a single turn that would take other factions multiple turns to set up.

• The robots are probably the most internally combolicious faction in Smash Up. Most of the robots give additional effects or minion plays, and the Microbot Alpha is the ultimate synergist by making all your minions count as microbots. Flavor the robots with any of the other factions effects for combo madness.

• The geeks are the ultimate rules lawyers of Smash Up. The biggest trick for Geeks is for you to learn Smash Up inside and out. Knowing combos that are available to your opponents will make your timing and use of cards like Banned List and Wil Wheaton most effective.

Buy the physical version of Smash Up – The Card Game here. 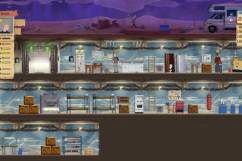