Two fan favorites from the original game are coming back to Splatoon 2 today.

Blackbelly Skatepark is coming to the game as a new stage. The stage features many ramps and hills as well as the cylindrical tower in the middle of the map for sniping with chargers. The only changes coming to this map from the original are that the two spawn points are located further back on elevated platforms, according to the game’s official Tumblr blog. This ensures that enemies don’t spawn camp, or take down players right as they come out of the spawn area.

We’ll also be getting the Gold Dynamo Roller. Like the Dynamo Roller, it has the widest area of ink coverage for rollers and also does the most damage but is also the slowest to swing and move. However, instead of carrying an Ink Mines and the Sting Ray special like the regular version, the Gold Dynamo Roller carries Splash Bombs and the Ink Armor special according to a translation of the Japanese Twitter account for the game.

Last week we got the Range Blaster, a modified version of the Blaster that has a longer range but a slower firing rate. It also comes with Suction Bombs and the Ink Storm special. The week before that welcomed the Custom E-liter 4K and its scoped edition which comes with Squid Beakons and the Bubble Blower special weapon.

The Halloween Splatfest completed a while back and Team Vampires beat Team Werewolf in a landslide victory. They took top honors in popularity, most solo match wins, and most team match wins.

We’ll be seeing many more Splatfests as Nintendo promised support for at least two years. It’s fair to say that there will be plenty of new weapons and stages to go along with the new Splatfests.

What stage or weapon from the original game do you want to see return? let us know in the comment section below. 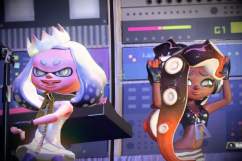