2017 may have been a tumultuous year for gaming, but we still got some quality releases.

Among the flood of great games that improved upon storied franchises and introduced new IP’s, a few remakes and remasters dropped. Nostalgia-mania ran high with the return of a certain orange marsupial. Former portable exclusives got upgraded for consoles. Plus throwback RPG’s, adventure games, platformers and more got a nice facelift. This list is full of the types of games that respect the original source material and do so much to improve upon its foundation.

The titles presented here cater to fans of the original release and newcomers who want to experience the best version of a game they never played before. Without a doubt, these are the best video game remakes and remasters released in 2017.

Besides Final Fantasy, Dragon Quest is one of the most legendary JRPG franchises known to man. Square Enix has spent years producing mainline entries and spinoff games within the series’ world full of swords, shields, magic and Blue Slimes. Originally released on the PS2 back in 2004, Dragon Quest VIII amassed several new fans thanks to its modern improvements and nods to old school JRPG sensibilities. This portable remaster throws in a whole bunch of new content into an already massive game. There’s two new party members to level up, new dungeons to explore, new bosses to challenge, new items to attain and more. And for all the Pokémon diehards out there, you’ll appreciate this game’s Monster Arena battles. Enjoy Journey of the Cursed King in its finest form on the small but still powerful 3DS.

When it comes to niche franchises that have a core group of fans awaiting its next release, the Danganronpa series is one of them. The overall premise of the first game deals with a murder mystery plot set in a high school turned prison. Then there’s the sequel, which transports you and a wealth of unique students to a remote island. Both games challenge you to figure out who’s killing who and why a bear named Monokuma is torturing you. Danganronpa 1-2 Reload brings the visual novel experience of the aforementioned two games from the PS Vita to the PS4. The visuals come with some notable improvements, the same nail-biting gameplay has been kept intact and a new feature (School Mode) lets you converse with your fellow students even more than before. True fans of Danganronpa owe it to themselves to own this HD collection.

Now here’s a second dosage of Japanese visual novel goodness that’s available on our shores. Zero Escape: The Nonary Games offers up the most definitive way to experience these Saw-like games. The Zero Escape trilogy (Zero Escape: Nine Hours, Nine Persons, Nine Doors and Zero Escape: Virtue’s Last Reward) all entail a story of overcoming insurmountable odds. One portion of each game deals with you getting to know the other kidnapped victims who’re trying to survive, while the other half throws puzzles at you that determine your escape route. If you happened to get a kick out of the last remastered collection on this list, then Zero Escape: The Nonary Games is also highly recommended for you as well.

Final Fantasy XII happens to be one the more divisive games in the long-running JRPG series. Some fans regard it as one of the best entries of all time, while there are those who don’t look back on it so fondly. It debuted a new battle system mechanic that was more akin to the way fights are handled in MMORPG’s and more features that people either loved or lamented. The Zodiac Age brings Final Fantasy XII back to the forefront with a host of welcome changes. Along with improved visuals, several features have gotten retooled. The Zodiac Job System has been changed for the better, a challenging Trial Mode has been added in and Speed Mode lets you zip through vast landscapes. If you’re willing to give Final Fantasy XII another chance or if you just want to relive it its best parts once more, then picking this remaster up is mandatory.

Taken from Game Review: The Crash Bandicoot N. Sane Trilogy proves that Crash’s original trilogy is just as admirable as it was back in the day. It’s gotten the HD remaster facelift that it deserves, plus the audio is just as humorous and memorable as its original incarnation. The stages themselves look amazing and the gameplay itself is still mechanically strong in the areas of tight platforming and varied boss fights. The first game in the series is sure to enrage you and force you to question your skills as a gamer due to its high difficulty. Don’t let that deter you, though. All three titles offer up some of the best platforming experiences in 2017 that people celebrated back in the mid to late 90’s. This collection is a shining example of how to revive a beloved gaming icon. 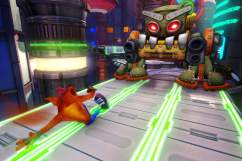 Wonder Boy: The Dragon’s Trap is a full-fledged remake of the 1989 Sega Master System original. What’s so remarkable about this entry is its new hand-drawn animations and rearranged soundtrack. Gameplay wise, The Dragon’s Trap harkens back to the days of old-school platformers. There’s hacking ‘n slashing, platforming, animal transformations that bestow new abilities upon your hero and huge boss battles to hop into. The most noteworthy features from this remake is the ability to change the game’s graphics back to its 2D phase, easier weapon-toggling, a new female warrior to play as and new secret areas. Wonder Boy: The Dragon’s Trap is the remake nobody knew they wanted, but are now more than pleased to have.

Tim Schafer is associated with some of the finest PC adventure games ever released. His years working under LucasArts led to the production of classics, such as The Secret of Monkey Island, Day of the Tentacle and Grim Fandango. Schafer’s first solo-led project is another one of those amazing adventure games that now has a new lease on life – Full Throttle. This remastered take on the biker badass inspired game features the same puzzle-focused gameplay 90’s gamers are still nostalgic for. The graphics look a hell of a lot cleaner, but you can switch back to the original visuals if you’d rather enjoy it in its first form. Double Fine Productions and Shiny Show did right by the original game and made it all the more appealing to veterans and newcomers alike.

Buy a PSN gift card here so you can digitally purchase Full Throttle Remastered for PS4 and PS Vita.

Tekken reached its seventh main entry. Crash Bandicoot’s fur got a nice touch-up in his remastered collection. And the first PlayStation’s futuristic racing game series made its grand return. What a time to be alive, huh? The WipEout Omega Collection compiles two awesome games and an expansion pack (Wipeout HD, the Wipeout HD Fury expansion and Wipeout 2048). All three editions feature the breakneck racing pace WipEout is known for, plus the graphics look even shinier and sleeker than ever before. There’s hours of replayability to be had here thanks to the abundance of racing cups to complete and online challenges to compete in. Racing game fans owe it to themselves to add this awesome remastered collection to their PS4 library.

So now it appears that Sega’s open-world, beat ’em up series is gaining even more traction outside of Japan. American fans finally got to play the prequel entry to the entire series (Yakuza 0), plus a remake of the very first game arrived on US shores. That remake ended up being Yakuza Kiwami. After completing the aforementioned prequel game, Yakuza Kiwami acts as the next logical step in experiencing Sega’s highly lauded franchise. As Kazuma Kiryu, you’ll travel through Japan as you smash goons faces into the cement and play various minigames. One of the newer features is the added “Majima Everywhere” mode, which throws in randomized battles against the always entertaining Goro Majima. Yakuza Kiwami is pretty much the gateway to everything you’ll end up loving about the entire series.

Development studio MercurySteam did wonders for Konami’s once-dormant Castlevania franchise. The first Lords of Shadow and its portable counterpart brought the Dracula hunting simulator back to its former glory. Their hard work on those games didn’t go unnoticed as someone from Nintendo saw fit to bring them onto a huge project – a 3DS remake of Samus’s first handheld adventure. Metroid: Samus Returns sticks to the same story arch of its Game Boy rendition and does a fine job of improving the visuals, audio and gameplay mechanics. Samus is given the ability to shoot in any direction she pleases and physically counterattack, which adds more depth to the alien busting skirmishes. Samus’ fervent fanbase wanted another 2D, side-scrolling adventure. This is the dream game they’ve been asking for.

The legend of Amaterasu started out on the PS2. Then it got revived for the Wii with motion controls and got an HD makeover for last-gen consoles. In 2017, Okami got another lease on life with another HD rendition. Thanks to the game’s newfound ability to output 4K graphics, Okami HD’s sumi-e art style pops off the screen even more. For anyone who’s still not in the know, this grand adventure borrows elements from The Legend of Zelda and tasks players with ultimately bringing light back to the land as the Shinto Sun Goddess. There’s the intriguing Celestial Brush mechanic, that lets you slash enemies in half, bring forth the Sun and even rebuild bridges. Along with all of that, there’s also a fun battle system and the ever-evolving tale of Amaterasu’s world saving exploits.