Arena of Valor was promised to come out in North and South America by Christmas in an email sent to players from the development team. Now the game is releasing today for both Android and iOS devices.

The game, also known as Honor of Kings, King of Glory, and Strike of Kings, has already been a massive – and controversial – hit in China with an estimated 200 million monthly players according to The Verge.

1. Arena of Valor Is a Real-Time 5V5 MOBA on Mobile

Arena of Valor is a multiplayer online battle arena (MOBA) where teams of five heroes battle it out with the goal of destroying the other team’s base. While the game mostly resembles other popular MOBAs like Dota 2 and League of Legends, it was built from the ground up to support the mobile platform. The Verge cites the game’s integration with chat services like QQ and WeChat allowing players to invite friends and discuss strategies with each other for the game’s success in China. This has lead to a surprisingly diverse player base. In fact, The Star reported that 54 percent of the game’s players are women.

Arena of Valor was published by Tencent Games, who also own League of Legends Developer Riot Games after acquiring the studio back in 2015. The game was first launched in 2015.

2.It Is Being Changed for Global Markets

Tencent built an internal team to localize and even change some parts of Arena of Valor for new markets around the world, according to The Verge. While the game originally incorporated heroes from Chinese folklore, in North America you’ll fight as Western fantasy heroes and even some DC Comics heroes like Batman and Wonder Woman. The game will also use Facebook to allow users to connect with each other.

According to The Verge, the game also launched in European countries in early August including Spain, Germany, Italy, and France. The game has been downloaded two million times in Europe.

In July 2017, China’s state-owned People’s Daily newspaper called Arena of Valor a “poison” and a “drug” that was harming teenagers. The newspaper claimed that a 13-year-old student jumped off a building after being scolded for playing the game, an 11-year-old girl stole more than 100,000 yuan (about $15,207) to spend in the game, and that a 17-year-old nearly died of a cerebral infarction after playing the game non-stop for 40 hours.

The comment lead to Tencent’s shares diving by 5.1 percent on the Hong Kong exchange losing an estimated $17.5 billion in market value according to South China Morning Post.

Tencent enforced a daily time limit of one hour for players under the age of 12 and prohibited them from logging into the game after 9 p.m., according to South China Morning Post. Those between the ages of 12 and 18 have a time limit of two hours.

4. It Reportedly Caused a Woman to Go Blind

In October 2017, a 21-year-old woman played the game for up to eight hours straight and then lost sight in her right eye, as Mashable reported. She was diagnosed with Retinal Artery Occlusion (RAO), or when there is a blockage in one of the arteries that carry blood to the retina, at the Nancheng hospital. One specialist from the hospital said that the woman had likely suffered from RAO after playing excessively on her phone. However, Dr. David Allamby told The Daily Mail that there was a “slim” chance that she got RAO from playing the game. He said that RAO is more likely to be caused by some form of cardiovascular disease or rarely by migraines as opposed to severe video-related eye strain.

The game was also announced for the Nintendo Switch during the Nintendo Direct presentation in September 2017. The beta for the Switch version will come sometime this Winter. 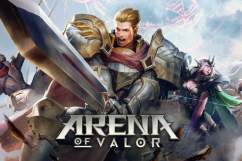 Arena of Valor: Top 10 Tips & Cheats You Need to Know