The return of Overwatch’s  Winer Wonderland event has officially been announced by developer Blizzard and we already got a small taste of what we can expect. While there was a fair amount of new information – including a new arcade mode detailed below – Blizzard also teased a few upcoming winter skins. Perhaps one of the most anticipated and exciting items on the way is a new Hanzo skin from the Overwatch comics. Fans have been pleading for Blizzard to make this outfit ever since it was first shown back in December of 2016.

Seen in the Tracer Reflections comic, Hanzo can be seen near the end of the comic with a young boy staring at a cake. The main story revolves around Tracer hunting for a present to give her girlfriend, but the end of the story shows what the other Overwatch characters are doing for Christmas. We get to see McCree and Sombra at a bar,  Genji writing a note to Mercy,  and Reinhardt spending time with Torbjorn’s family. While this page caused a ton of different questions, one of the most consistent was when could we get the Hanzo skin?

It appears that Blizzard has listened and that this skin will be coming to the Winter Wonderland event that drops next week. While Jeff didn’t outright say which comic he was referring to, there is little doubt that this is one he was suggesting is coming. There was no word on what the rarity of this skin would be, but if we had to guess it will most likely be a Legendary. We also don’t know if this skin is tied to the specific winter event or if it will go into circulation with the normal look boxes. Given it isn’t festive, our best guess is that it will be thrown into the base game’s loot box circulation.

For all the other winter skins, players should expect them to cost their traditionally inflated prices. Any new outfit or additional cosmetic from 2017 is always at a higher cost.  If you missed out on any of the Winter event outfits from last year then you’re in luck. All of them can be purchased for a heavily reduced price that falls in line with the core Overwatch skins.

The Winter Wonderland event is also seeing the return of Mei’s snowball fight game mode. Both Ecopoint Antartica and the Black Forest will receive Christmas overlays to fit with this theme. Additionally, a new game mode called Mei’s Yetti Hunt will be introduced that is designed to play out like a boss fight. One team will be comprised of 5 Meis that are tasked with hunting the Yeti (Winston) down. Winston’s goal is to pick up power-up drops and gain more power until they can activate their Primal Rage ability.

Once triggered, the Mei’s have to run for their lives and try to escape the angry Yeti. The game ends with either the Mei’s escaping, Winston dying or enough Mei’s perishing. It sounds like a chaotic mode and it will be interesting to see what tricks the Yeti can pull to give himself an advantage against the pack of Meis hunting him down. 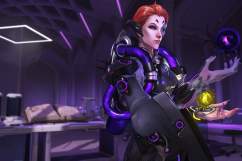 Overwatch’s Moira: 5 Tips and Tricks You Need to Know