Imagine the look on fighting game fans’ faces when the reveal trailer for Soulcalibur VI dropped.

A few weeks before, huge leaked details about the game began circulating around forums and news websites. All that info led some to believe in the game’s existence and others simply thought it was just too good to be true. Several jaws hit the floor once the image of a young Mitsurugi clashing with a revived Sophitia was seen during the 2017 Game Awards.

Bandai Namco Entertainment dropped a whole bunch of official details about the game later on…except for one crucial element – GUEST CHARACTERS! Ever since Link, Heihachi and Spawn entered the arena in Soulcalibur II, the series has made it a tradition to feature warriors from outside franchises.

Here’s hoping that this tradition continues with the upcoming sequel. As a matter of fact, here’s a wishlist full of guest participants who’d be perfect for Soulcalibur VI.

You know which demon hunter got faithfully recreated once the character creation feature got featured in Soulcalibur III? Devil May Cry’s slick talking, damn near invincible Dante. The fact that he hasn’t become an official member of past games in the Soulcalibur series is a travesty. With the sixth entry on the way, now’s the perfect time to give Dante the chance to test his weapons mastery against Mitsurugi and crew.

Dante’s moveset and arsenal is incredibly varied, which makes it pretty difficult to give him a balanced playstyle to battle with. It’d make sense for him to wield his main Rebellion sword and have access to additional weapons during his other moves (Agni & Rudra, Nevan and Gilgamesh). There’s no need for Ebony & Ivory, Dante. YOU GOT THIS!

While War may be an awesome character who’d fit well into the Soulcalibur universe, there’s someone even better than him – the double-scythe wielding Death. Death looks straight out of a Todd McFarlane comic, which means he’s the perfect replacement for Spawn and whatever the hell Necrid was supposed to be.

Death is just so damn cool due to his brooding nature and appealing vocal delivery. He’s capable of fending off comparable demonic foes like Nightmare thanks to his mastery over several scythes, hammers and gauntlets. Death should be a 1st-ballot choice for whoever’s being considered for Soulcalibur VI.

Geralt of Rivia (The Witcher)

Ezio Auditore da Firenze was a fun addition to Soulcalibur V, but the underwhelming nature of that sequel made his appearance quickly forgotten. Someone of his ilk that’d have a similar moveset is The Witcher’s Geralt of Rivia. Like Ezio, Geralt is a unique fighter who has a ton of tricks up his sleeve. His weapon of choice is a simple silver sword, plus he can whip out his crossbow for ranged combat.

What separates Geralt from Ezio is his use of magical abilities, which is something that could play quite well into Geralt’s moveset. He’ll be able to push enemies away with Aard, engulf them in flames with Igni and slow them down with Yrden. Geralt could end up being one of the more unique guest characters ever featured in Soul Calibur.

Ryu Hayabusa is the main star of his own Ninja Gaiden series. And he’s been known to use his swift punches and kicks to deliver KO’s to his opponents in Dead or Alive. In that fighter, he’s forced to keep his Dragon Sword sheathed since it’s a tournament that revolves around non-weapon usage.

If he gets the chance to create his own historic moments in Soul Calibur VI, that means Ryu will finally get to show off his skills with a katana in a fighting game. Besides getting the chance to cut through everyone with his Dragon Sword, Ryu can also employ the use of his Vigoorian Flail, Kusari-Gama and throwable Shuriken. Soulcalibur needs more ninjas. Ryu Hayabusa fills that role quite perfectly.

Undead pirates, lizard men, and even lightsaber wielders have stepped into the Soulcalibur arena. It wouldn’t be too far out of the game’s realm to feature a battle ready android. And the android I’m selecting for this next pick is NieR Automata’s 2B. Her levels of popularity have maintained their high levels due to the many rewards her game garnered in 2017.

So it makes a ton of sense for her to get a starring role in a fighting game that’s all about weapons mastery. Her moveset could be lifted from a combination of her best small/large swords, spears, and combat bracers. Imagine her whipping out her Cruel Oath blade for a combo starter, then transitioning right into a climactic ending with a huge swipe from the Beastbane. The possibilities are endless for 2B as a guest character in Soulcalibur VI.

Soulcalibur’s roster is full of some extraordinary warriors. Tekken’s eccentric samurai Yoshimitsu, Lizardman and the extra creepy Voldo are just a few of those strange warriors. After taking a look at the Xbox brand’s of 1st-party protagonists and antagonists, one sticks out as the perfect oddball choice for Soul Calibur VI.

Killer Instinct’s living, breathing skull and crossbones-themed swordsman Spinal is that individual. Spinal fits right into Soulcalibur’s mix of historical and fantastical battles. He’s well known for being pretty good with a curved cutlass and buckler shield. His supernatural abilities and demonic cackle are ripe for a fully developed moveset in Soulcalibur VI.

The PlayStation brand allowed God of War’s Kratos to use his chained blades against the Soulcalibur roster in the past. Heihachi was an odd but ultimately fun character to use when he became a part of Soulcalibur II’s PS2 roster. Now that we’ve finally made it to the sixth official entry in Soulcalibur, a certain gothic hunter makes perfect sense as the PS4 edition’s guest character.

Bloodborne’s nameless hero is an incredibly imposing figure. His fearsome repertoire could focus around his use of a Saw Cleaver, Threaded Cane and a Blade of Mercy. The Hunter should take an exile from Yharnam and prepare to enter “a new stage of history.” 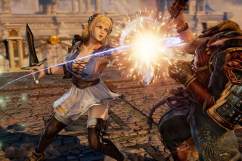