YouTube gaming critic YongYea found two interesting articles written by EA employees in the Association for Computing Machinery (ACM) Digital Library. The papers discuss two different patents for potential use in EA’s games that were submitted in March 2016 and might be approved sometime in 2018 according to YongYea.

One article is Dynamic Difficulty Adjustment for Maximized Engagement in Digital Games published in April 2017. The paper talks about how Dynamic difficulty adjustment (DDA), mechanics in a game meant to make the game easier or harder based on player performance, can be used to maximize player engagement throughout a game by reducing boredom or frustration. Based on their research, they have developed a system using DDA and applied it to multiple EA-published games, and observed up to nine percent improvement in player engagement with “a neutral impact on monetization.” According to the paper, the difficulty adjustment proposed would happen without the player’s knowledge.

Now DDA can be a useful tool in game design to keep players playing games even after hitting a road block while making sure that developer work doesn’t go to waste. It’s not a new phenomenon either; games from Super Mario 3D Land to the original Crash Bandicoot have implemented systems to give players an advantage if they keep failing a challenge. But as YongYea points out, this system could be used to manipulate difficulty and drive people to spend money on microtransactions, which is especially worrisome if they go on without player knowledge. He compared it to the time Destiny 2 reduced the amount of XP players would gain for certain activities while the user interface told players otherwise, giving players the illusion of XP grinding becoming more of a slog and goading them to just buy the Bright Engram they would have earned by leveling up.

YongYea then discovered another paper published by EA employees as well as researchers from Northeastern University in Boston, Massachusetts and the University of California in Los Angeles, California. The paper, EOMM: An Engagement Optimized Matchmaking Framework, argues that current matchmaking systems based on matching players of similar skill levels is not optimal for engagement. The paper’s proposed Engagement Optimized Matchmaking (EOMM) framework is said to have higher player engagement compared to existing matchmaking systems.

How is this increased engagement achieved through this EOMM? According to the paper, they take player data such as install date, skill, play frequency, performance, and more to predict how likely players are to stick around for the next match. The paper emphasizes how Churn Risk, or the likelihood that a player stops playing a game, can be reduced by certain combinations of wins, losses, and draws.

YongYea said that this algorithm could be used to adjust game parameters and matchmaking in order to reduce the risk of players dropping out of a game. So if players have a losing streak, then the next match could be artificially set up so that they win by matching them with weaker players in order to get them to keep playing. And if players have a winning streak, then their next match could have them face more skilled players so that it end in a loss or a draw in order to make them want to right that wrong and get them to play longer. This could potentially lead to matches that aren’t decided by fair competition or player skill but by manipulating the game towards a predetermined outcome.

“We might be looking at a future in which EA games decide for us when we get to win, lose, or draw,” said YongYea. “This is psychological manipulation at its finest.”

Both the DDA and EOMM systems, while focused on player engagement, could be used to get players to spend more money on microtransactions. Players can only spend money on in-game purchases if they’re in the game, so increasing the time they spend with the game will increase their likelihood of spending money. If this increased engagement is linked with an in-game currency, players could be even less inclined to quit not as they’ve already invested so much time obtaining resources in a phenomenon known as the sunk-cost fallacy.

As for the changes to matchmaking, imagine if players are constantly made to lose games. If there are in-game advantages ready to purchase as was the case with EA’s Star Wars Battlefront II, then they may be more inclined to purchase those advantages to get an edge in gameplay. All this spending is on top of the game costing $60 already.

The paper on EOMM even spells it out in the Conclusion section:

“Within the EOMM framework, the core building components, skill model, churn model, and graph pairing model, are uncoupled so that they can be turned and replaced independently. Moreover, we can even change the objective function to other core game metrics of interest, such as play time, retention, or spending.”

YongYea said that EA’s idea of engagement is less about making a game more fun for longer but about monetizing the player’s activities over a longer period of time.

As EA CFO Blake Jorgensen said in a speech at the UBS Global Technology Conference in November 2017, “If we had a live service on that, and we could keep people engaged, give them even more to play them, we would also be able to try and monetise them over time.”

“It really isn’t hard to discern where EA’s priorities truly lie when they’re so intent on hiring researchers to find the best mathematical way to manipulate players rather than just passionately making games that are fun and engaging by design,” said YongYea.

Whether or not EA will implement these features in future games such as the upcoming Anthem has yet to be seen.

Patenting ways to use matchmaking in order to get players to spend money is nothing new. A patent by Activision was approved in October 2017 outlining such a matchmaking process, as reported by Kotaku. The matchmaking process as described in the patent would use player data in order to place them in scenarios that would make in-game purchases more attractive. If a player wants to become an expert sniper, for instance, the game may match them with a highly skilled sniper so that they can be encouraged purchase the weapons and items used by the skilled player. An Activision spokesperson told Kotaku that this was an exploratory patent filed in 2015 by a team working independently from their game studios and has not been implemented in-game.

Games have already started to use psychological manipulation to make microtransactions more enticing. Their presentation as random drops from loot boxes already exploits addictive tendencies by emulating the feeling of gambling even though they’re not legally defined as such. Some loot box systems go even further than that, from the aforementioned advantages gained from Battlefront II’s loot boxes to Call of Duty: WWII turning loot boxes into a public spectacle by having them descend from the sky in the game’s social spaces as Eurogamer reported. This is again on top of paying full price for the game itself. 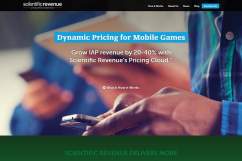