There’s little to say that’s negative about the way Epic Games’ Fortnite: Battle Royale has grown in popularity since its release into free-to-play. The former Gears of War developer has shown a lot of love and care in the game in terms of getting it polished across all platforms and updating it with new content regularly.

The latest update, which added brand new locations on the map, is arguably the biggest update to hit the game since launch. Fortnite: Battle Royale has thrown a new twist into the battle royale genre by introducing a building mechanic and giving the game a less “serious” feel with the inclusion of items such as Boogie Bombs and Jump Pads.

While other battle royale games have seen their day in the sun and have since seen it practically set (The Culling, H1Z1, etc.) Fortnite: Battle Royale is only growing and you can often find in the the top games section of Twitch along with PlayerUnknown’s Battlegrounds.

One thing that has been plaguing the game for a while now is the dreaded “Double Pump” strategy. The way this tactic works is players have two pump shotguns, white or green doesn’t really matter in this case, and they cycle through them without ever needing to reload the shot making the pump shotgun effectively work the same way as a tactical shotgun.

The issue with this tactic is the pump shotgun is one of the most powerful weapons in the game by itself so by taking advantage of situations with this strategy, oftentimes you’ll find yourself dead in a few seconds before you even get a chance to react. One thing has become abundantly clear and that’s that the “Double Pump” needs a nerf in a big way.

If you haven’t tried out this strategy yet then you should be aware of some of its downfalls. Since the shotguns will take up two of your inventory slots you may have to drop a ranged weapon in return for additional close range firepower. The “Double Pump” is still no match for a sniper at a long range.

For the past few streams, Ninja, an extremely popular Fortnite: Battle Royale Twitch streamer, has been trying to bring awareness to the “Double Pump” problem by using it on his streams. This combo is dangerous in the hands of any player but when put in the hands of a professional player it becomes downright lethal. Ninja has claimed all of this is being done to gain publicity for the issue in hope of a fix coming in the future.

On the other hand, we have streamers that have adopted the “Double Pump” strategy as a legitimate way to get the upper hand on other players. Daquan_ even went the extra mile and created a YouTube video, embedded above, showcasing to players how easy it is to use the tactic.

As for how the weapon would be nerfed, that’s hard to say. We could end up seeing a delay in shooting after we switch weapons or we could force the shotguns to still be reloaded after shooting and switching, similar to how the bolt-action sniper rifle works.

Whatever the case may be with this combo, we hope a resolution is reached soon. How about you? Do you believe the pump shotgun combo needs a nerf or not? Let us know in the comments below. In the meantime, we’ll see you at the Tilted Towers. 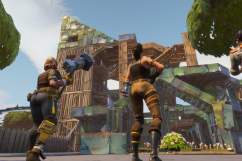