A Resident Evil 2 review code was provided by the publisher.

Resident Evil’s return from the doldrums of fan discontent has been exciting to watch. The 6th official entry in Capcom’s survival-horror franchise was viewed as a huge misstep that deviated from what made the series so great. After going back to the drawing board, the creative minds behind the next installment of Resident Evil produced an enthralling experience.

The elements of heart-thumping horror, careful item management, and clever puzzles came together again for a fresh 1st-person experience with Resident Evil 7: Biohazard. With the current standing of Resident Evil being in a good place, fans are now happily looking towards the future of the franchise. But those same fans always look back fondly on the golden age of the series and hope to revisit them in a modernized way. Thankfully, that dream scenario has become a wonderful reality now that Resident Evil 2 has gotten the AAA-remake treatment.

If you poured hours into the original incarnation of Resident Evil 2, then prepare to do it all over again and love it just the same. On a visual level, this remake excels in many areas. The famed police station, sewer, and underground lab facility have all been reimagined in a fascinating way. Familiar rooms that you perused through once before manage to retain their original layout and look even more impressive than before. There’s no need to worry about having the surprises lurking in each room spoiled for you since you’ve technically already experienced them – a slew of changes freshen up your trek through each and every corner of Leon and Clair’s harrowing journey. The usage of creepier audio and foreboding darkness does a lot more to make the scares hit much harder than they originally did.

Leon and Claire’s pixelated likenesses are no more. The two heroes within this horrific ordeal (plus the rest of the familiar cast) look and move as fluidly as possible thanks to the implementation of RE7’s “RE Engine.” This developmental tool’s mechanical work can definitely be seen in the way that zombies are handled. Their gruesome faces, detached limbs, and brutal nature make them much more formidable and far scarier than their predecessors. The rest of the bioweapon gang are also improved in that regard – for instance, the more sinister appearance and behavior of Lickers are even more horrifying this time around. It’s quite clear that a lot of love and care went into making every part of the original source material shine in a current-gen scenario.

The original Resident Evil 2 was given a ton of praise thanks to its excellent pacing. Not only has that characteristic of the game been kept intact, but it’s also gotten even better. The puzzles that seemed out of place in the original have been removed in favor of brain teasers that make more sense in the remake’s setting. Clues and key items are regularly doled out, which push you to discover previously inaccessible rooms.

Shocking moments and major boss fights erupt in new and surprising ways. The hammy voice acting has been replaced by a genuinely respectable effort from new voice actors, plus the game’s climactic cutscenes have been implemented in a much better way. Along with these welcome changes comes the implementation of quality of life improvements. The gunpowder system has been added, ink ribbons have been abandoned, and switching to another weapon has become a much easier process.

Once the credits roll, the unlockable elements that were present in the original make their welcome return. New scenarios open up for both characters alongside familiar survivor playthroughs. The same care that was put into the base campaigns is just as prevalent within the additional modes you’ll certainly come to enjoy.

The fixed camera angles and tank controls are no longer used to give each mode its tough to overcome difficulty – that element now comes courtesy of the bioweapon threats and claustrophobic feel of various rooms. Getting access to Resident Evil 3: Nemesis’ quick-turn maneuver to escape the more dangerous encounters is a life-saver. If you happen to stick around to get rid of your undead harassers, you’ll elicit a feeling of pure joy while blasting them into bits and pieces. This remake’s fun factor and replay value are both top-notch.

The Resident Evil 2 remake is a project that’s been handled with the utmost care and appreciation for the original. The greatly enhanced visuals, smarter (and more dangerous) enemy AI, better pacing and clever nods to the original are all commendable elements of this major Capcom rework.

While a slew of familiar callbacks to the setup of the original version are evident, a slew of smart adjustments has also been put into place. These changes do a great job of providing fans with new ways to approach Leon and Claire’s unnerving expeditions. Resident Evil 2 has been reborn and retooled in all the best ways possible. This is the best video game remake that other modernized classics of its ilk should be judged by. 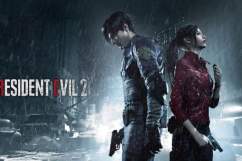