A Devil May Cry 5 review code was provided by the publisher.

The pinnacle of action games arrived in 2001 with the release of Devil May Cry. What originally started out as Resident Evil 4 (which is still crazy to believe) eventually morphed into its own successful franchise. Capcom and the man who would go on to produce greatness under the banner of PlatinumGames (Hideki Kamiya) first introduced the world to the demon hunter known as Dante. Ever since then, fans have been treated to a horrendous sequel, an amazing prequel, a flawed yet still enjoyable last-gen release, and a controversial reboot. The wait for an official fifth entry has been long, but it has finally come to an end. Devil May Cry 5 marks the return of an action gaming staple and a high point for the series as a whole.

If you’ve been following the story of Devil May Cry since its inception, then you’ll come to appreciate the tale being told with this sequel. While the gist of it basically boils down to taking down a powerful demon and ridding the world of a blood-sucking tree, the moments strewn throughout the plot deliver a plentiful amount of fan service.

Even if you have no prior knowledge of everything that’s led up to this sequel, the awesome cinematography, and intentionally corny humor will entice you to see it through. Making your way through each mission and coming closer to the truth behind your main foe is pulled off in an interesting manner. Once you discover the origins of the mysterious new character known as V, you’ll come to appreciate the way that particular reveal is handled. Longtime fans will definitely get the story payoff they’ve been waiting for once they reach their journey’s end.

But we all know the true appeal of a Devil May Cry game – its incredibly rewarding, infinitely fun hack and slash (and shoot) gameplay. The battles you’ll find yourself embroiled in are not only a constant treat, but they also look as good as they feel. The decision to adopt the photorealistic look that DmC: Devil May Cry is known for was a smart one. Dante, Nero, V, Nico, Trish, Lady, and the smorgasbord of demons you’ll run into look more visually refined thanks to the work of the RE Engine. The same sentiment goes for the UK-inspired environments and demon-infested locales you’ll venture into. Everything looks and sounds great, as the strong vocal work and perfect tunes suited for combat perform their job well.

Once the music revs up, the fun truly begins. This time around, you’re given the chance to wield the varied skillset’s tied to three playable characters. Nero makes his return and brings his familiar moveset from Devil May Cry 4 with him. While his Devil Bringer attachment is no longer a part of his arsenal, the debut of robotic arms known as Devil Breakers is a fitting replacement.

Most of the fun that comes from using Nero is tied to this new battle mechanic – finding new ways to use each Devil Breaker opens up his combat toolset in a major way. The only problem that lies within this new system is how it prevents you from manually choosing which one you’d like to use. Instead of allowing you to switch between them at will, you can only use the most current one you’ve collected until you break it and move onto the next one. Not having the option to choose your preferred Devil Breaker in the middle of a battle is a minor annoyance.

Dante is still as cool and cocky as ever. He heads back into battle with full access to his four playstyles and iconic weapons loadout. While managing all of them and remembering the maneuvers tied to each one is a daunting task, mastering them all is immensely rewarding. Dante’s fun factor reaches even higher levels once you gain access to a new pair of saw-blades that transform into a motorcycle.

Powering through demons and smashing them against a wall with its speed demon form never grows tiresome. As for V, he presents the most unique style of gameplay that Devil May Cry has ever seen. Instead of taking demons head-on, you’ll move V around the battlefield and send in your demon allies to handle your dirty work. There’s a ton of fun to be had as you mix and match your demons’ attacks, recite poetry to refill your special meter, and summon a giant golem to cause mass destruction. Thankfully, V adds to the game instead of taking anything away from it.

Devil May Cry’s mission structure remains unchanged with this latest installment. What makes this formula less stale is the way in which some missions let you select a character beforehand. Devil May Cry 5 actually gives you a reason to replay previously beaten stages since you can approach them with another style of play and tackle a different route.

The added benefit of playing alongside random ghosts based on human players makes certain missions especially memorable. Diehard Devil May Cry fans will be pleased to know that the series’ previous errors aren’t here to negatively impact each mission. Gone are the terrible boss fights, boring environmental puzzles, and lazy backtracking. And thank the heavens that this sequel doesn’t include a rage-inducing random dice roll stage! Devil May Cry 5 thankfully rights the many wrongs of its predecessors.

Devil May Cry 5 is a love letter to those who’ve stuck with the series since its inception. The tale it weaves is well told and the revelations that come from it are fun to follow. The finely-tuned combat is hard to pull yourself away from – tinkering with the varied movesets of Nero, Dante, and V will keep you entertained long beyond the adventure’s end. The switch to a more photo-realistic art style helps this sequel reach its full graphical potential. And as expected, the heart pumping music brings the game’s action-heavy experience together quite nicely. This is the sequel that fans have been clamoring for. Devil May Cry 5 is without a doubt the new series plateau. 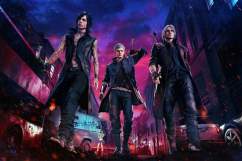