Prop Hunt is one of the latest and most entertaining game modes introduced to Fortnite. Tied to Creative Mode, this custom game focuses on one team of players attempting to hide in the environment while others are searching for them. This creates some chaotic and hilarious moments, especially if you have a big group of users. Since Epic Games is only showing off one map for this mode, we decided to highlight some of the best Prop Hunt maps you need to try.

Remember, to activate these maps you will need to load up Creative. Now go to any portal, access the rift’s menu, and then input any of the codes below. This will swap the maps out, allowing you try a different prop hunt level. Now just enter the rift and you will be warped to your map of choice!

If you are more of a fan of deathruns, check out our list of the best parkour maps in Creative mode.

Here are the top 10 best Fortnite Prop Hunt maps you need to try:

One of my personal favorites, Fortniteart’s Swimming Pool is a condensed, but intricately designed map. Boasting a nice little main street, basketball court, loading dock, gym, and a tiny park, you can easily find new places to hid each map. Items have enough variation to make it difficult to spot something out of place. Yet, the level is small enough to still give the Hunters a decent chance at discovering users hiding in plain sight. If you’re going to play any alternate map, we suggest starting with Fortniteart’s Swimming Pool. 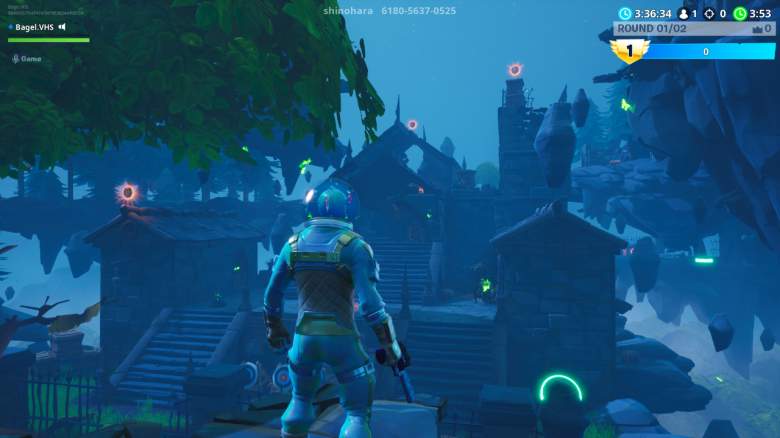 Looking for something a bit spookier? Warlock’s Graveyard is a Prop Hunt map broken across multiple floating islands. This adds a second layer of danger to the game since you can fall to your death. Every island is full of objects you can disguise yourself as and the time of day makes hunting quite challenging. Hunters have limited ammo, so they will have to be a bit more careful when tracking down props. Remember to use those bounce pads so you can jump from island to island!

Perhaps one of the hardest Prop Hunt maps for hunters, Asteroid Arcade is a dark, neon colored maze filled with games and prizes. There are a ton of items you can disguise yourself as, making it difficult to hunt the props by yourself. However, the open rooms and confined space limits the props ability to move without being seen. Featuring a shooting gallery, prize room, and multiple arcade cabinets, this map ooze’s 1980s. Consider hiding in the shooting gallery as a target if you want to taunt your opponent!

Perfect for big groups, Western World is a desert level that has some entertaining, unique areas to hide. Despite being pretty big, there is a nice balance of props that rewards smart positioning and use of the environment. There are a lot of places to hide, so it may take a few rounds before the hunters really know what to look for. But, any level that lets you disguise yourself as a dinosaur and not make it obvious is a win in our book. Just make sure to check the rocks around the small pond, since it’s a superb hiding spot.

Another favorite, The Villa V2 is a sprawling estate boasting multiple rooms, themes, and items to transform into. The centerpiece is a large mansion that has everything from a beautiful inner garden, arcade, and even it’s own store! Behind the building are the pool and archery range which offers some clever items to transform into. Even though the 13-minute timer may seem high, it’s needed given how sprawling this level is. Expa_aztox’s map is perfect for replaying more than once since the level’s size constantly offers new places to hide.

Great for smaller groups, the Modern Museum is a large building filled with ropes off artifacts and rare treasures. A fantastic mix of big open rooms with limited items to turn into and small stores with tons of potential, Modern Museum is perfect for those who want to put their hiding skills to the test.

Being able to naturally blend in with the rest of the exhibits can make or break a successful round, so take your time when deciding on what to be. Another unique aspect is you get to use Grapple Guns, allowing for some flashy and stylish maneuvers through the two-story building.

Prop Hunt veterans may recognize this map as a recreation of the Garry’s Mod map of the same name. A claustrophobic level, Office is a multi-floor building complete with a parking garage and multiple rooms. While you sadly cannot enter every area in the structure, Office is superb for people sick of bigger, more open maps. This is a very challenging and intense level that will put your hiding skills to the test. Don’t expect to move much after you find your initial hiding spot.

One of the best on our list, Mega Movie Theater is more than just a single building with a few movie screens. Hfdgamer’s medium sized level is a small shopping square with multiple stores and places to hide. Coins are fairly placed, forcing props to go out of their way, without making it to obvious. Mega Mall certainly encourages constantly swapping disguises, which makes more kinetic gameplay moments. This is a map that shouldn’t fly under your radar.

There are also some fun nods to the film, such as a massive Mr. Potato Head figure that looms over the room. If you’ve been feeling nostalgic, hop into this room and live the life of Woody or Buzz Lightyear.

One of the cleverest maps we’ve come across, Props on a Plane is set on a small, two-floor passenger plane. While the limited running room makes for less than exciting chases, the level’s intricate design offers a wealth of hiding possibilities. Props on a Plane is a challenging map, but it’s more than possible to seamlessly blend in. The dark lighting makes it tricky to see everything, giving the props a slight advantage if they do need to relocate. Knowing where the hunter is will be an important aspect for claiming victory.