It’s an excellent time to be a Star Wars Battlefront 2 fan as the developers at DICE have been hard at work with adding new and fresh content into the game.

Coming off the Capital Supremacy update, the team has been hard at work with bringing new maps into the mode.

A year ago, players were promised Clone Wars content and the team has delivered in a big way. New heroes like General Grievous, Obi-Wan Kenobi, Anakin Skywalker and Count Dooku have all entered the game and even a new map in Geonosis has arrived.

EAGeneral Grievous has arrived in Battlefront 2.

We’re now approaching two years since the launch of Battlefront 2 but the updates aren’t done coming in. This is certainly a much different game than what you first experienced back in 2017 with the loot box scandal.

Going into EA Play 2019, the team promised one more Community Transmission and that has now arrived confirmed both Felucia and Droidekas.

Moving on past the Clone Wars, players don’t have a clear direction the game is going in, but one logical step would be back to the Sequel Trilogy given the fact a new movie is right on the horizon.

This Community Transmission gives us a look into the road ahead with Star Wars Battlefront 2 and lets players know if it’s worth sticking around for. If you’re a fan of Droidekas then you’ll be interested.

If Battlefront 2 isn’t your cup of tea anymore, a single-player Star Wars experience is on the horizon for the first time in several years.

Star Wars Jedi: Fallen Order puts players in command of a Jedi who survived the initial Jedi purge and was forced into hiding as he tries to blend in and not be hunted down.

For more information about Fallen Order, make sure you tune into EA Play and find out more about what the game has to offer.

It was around this time last year when we first announced that Star Wars™ Battlefront™ II would be heading into the Clone Wars. We’ve since been to Geonosis, new reinforcements and heroes have joined the ranks, and the war between the Republic and Separatists continues to rage across the galaxy in Capital Supremacy.

The Clone Wars doesn’t end here. Starting this month, on June 26th to be precise, we have more Clone Wars content coming to Star Wars Battlefront II as part of the Where are those Droidekas? Update.

When you deploy onto Naboo, you will notice that it’s set at dusk. The embered sky adds a greater layer of atmosphere to the city. Alongside the dusk setting you’ll notice that the city streets are showing signs of previously fought battle and skirmishes; romantic ambience meets war-torn streets.

The entirety of the battle takes place within the city streets itself, making Naboo a great location for those wanting to experience urban conflict from within the Star Wars universe.

If there is one reinforcement that we know is high on our community’s wish list, it’s the Droideka. Of course, we have a bit of history with these and while we won’t focus on the past, let’s just say that your passion and enthusiasm for these Rollies was not missed.

One of the most feared droids finally joins the Separatist army, wielding twin blasters and personal deflector shield generators, making them a formidable foe for anyone that faces off against them in combat. Destructive weaponry and a powerful shield aren’t their only characteristics, as their ability to transform and swiftly relocate has become synonymous with them.

A work in progress look at the Droideka

Short-range heavy weapons that deal significant damage to those unfortunate enough to find themselves caught in their crossfire. The Droideka can maintain full control of the blasters regardless of whether they’re stationary or they are advancing upon their target. Don’t let them get near!

The Droideka folds its cannons and legs into its chassis and becomes able to traverse the battlefront at breakneck speeds. The Wheel Form can be activated both with the ability button and by pressing the sprint button, which also further increases its movement speed while in Wheel Form. Additionally, the Droideka can exit ball mode either by pressing the ability button, activating the Energy Shield button, or by holding down fire.

Sharing ability with its fellow Enforcers, the droideka can overload its primary blasters. The cannons are instantly cooled and for a period of time the droideka can fire its blaster cannons with increased rate of fire.

The shield acts as a secondary health pool for the droideka, that is the first combatant that can shoot out from it. The shield goes into cooldown if it’s destroyed, or it’s manually toggled off.

Rolling onto the battlefront this month on June 26th, we will have the answer to the question you’ve all been asking: “Where are those Droidekas?”

Not to be outshined by the Separatists, the Galactic Republic will also be receiving a new Reinforcement in the form the TX-130 Saber-class fighting tank.

The TX-130 will provide the Galactic Republic with an armored fighting vehicle that is both quick and defensive. The speed allows the TX-130 to enter into battle, deal damage, and then make its escape; a great balance between agility and power.

A work in progress look at the TX-130

A pair of heavy laser cannons sit upon the TX-130 and act as its primary weapon system. Despite having a fixed firing line, the versatile nature of the tank means that it can quickly maneuver to ensure enemies are within its line of sight.

The Laser Barrage ability on the TX-130 fires a short laser cannon barrage of continuous blaster fire. During this time the TX-130 will fire automatically for a short period of time.

This ability is the perfect counter for when you encounter multiple small and fast moving targets, such as enemy droids or speeders.

Once the automatic firing sequence is complete, Laser Barrage will go into a recharge state until it’s ready to be fired again.

Rockets fire in an alternate fashion from pods on each side of the TX-130. The rockets are “dumb fired,” meaning they do not lock-on to enemies ad fire in the direction you aim them, like the ATT’s. When firing rockets you have the ability to fire them one at a time, or you can charge them up. When charged (by holding the fire button) the TX-130 will unleash all of the rockets in quick momentum.

Activating this ability will toggle the primary fire into Charge Mode. While in Charge mode the TX-130 will gain the ability to charge up a massive charged bolt that fires simultaneously from both the left and right turrets, at the expense of some maneuverability. Charge Mode is the perfect ability to use when facing a slow moving target.

Charge Mode has a duration of 20 seconds but can be canceled sooner if desired.

This is Skywalker. On site and ready to assist.

Deploying onto the battlefront this month is the General Skywalker appearance for Anakin.

An early look at Genera Skywalker

This iconic look comes out of the crucible of The Clone Wars animated series from Anakin’s many fights throughout the galaxy. During the height of the conflicts between the CIS and the Republic, some Jedi opted to wear armoured robes and gear than more traditional robes to protect them in the heart of battle.

As intense combat was almost always a challenge Anakin faced head on and something he had to be ready for on a moment’s notice during the war, he was often seen wearing this outfit both in and out of combat.

After the hardships he faced during the Battle of Geonosis, Anakin evolved into one of the greatest generals in the Grand Army of the Republic, often leading the 501st Legion into battle as the tip of the spear.

The General Skywalker appearance will be available on the 26th of June for 1,000 crystals or 40,000 credits.

Due to the diverse, and commonly harsh, environments the Clone Wars were fought across, tactical armour—often camouflage—was a necessity for the clone troopers to survive when their plastoid plating wasn’t enough to keep them safe.

Two legions that used camo most notably were the 212th Attack Battalion and the 41st Elite Corps, specifically the Recon and Scout regiments for both those legions, respectively.

The 212th Recon Division was outfitted with the angular Phase I ARF (Advanced Recon Force) armour and desert camo during the Second Battle of Geonosis when the Republic invaded the retaken world. Obi-Wan Kenobi (along with Anakin Skywalker and other Jedi Knights) led the siege with his loyal troops through dunes, canyons, and caverns of the Separatist-controlled planet.

As a splinter of the 212th Attack Battalion, the 212th Recon Division specialized in covert operations behind enemy lines. Their primary mode of transportation consisted of agile all-terrain vehicles, such as the AT-RT.

The 41st Scout Battalion was under the direction of Jedi Grand Master Yoda. The 41st Scout Trooper’s Phase II ARF armour, though featuring less plastoid plating compared to the traditional clone armour, allowed for greater mobility and flexibility in jungle-rainforest environments. The sunshield, wider visor, and overall shape of the helmet also help with vision when traversing or fighting in rainy foliage and wet regions.

This unit specialized in reconnaissance and warfare over difficult terrain, such as overgrown floral locations. Later, during the twilight hours of the Clone Wars, Commander Gree and Master Yoda deployed the 41st Scout Battalion onto the beaches of Kashyyyk to fend off a droid attack on the Wookiees, a system they could not afford to lose.

We’ll be back with the full release notes for the Where are those Droidekas? update, later this month.

We’ve talked a bit about Capital Supremacy over the last few months. The feedback we’ve received has been hugely valuable, as has all the discussion around game modes in general. As we move through the summer we play to add new ways to play epic battles, for players who want something besides traditional PvP. We’ll have more to share on this later in the year.

Outside of game modes, one of the most requested content additions comes in the form of planets. Coming later this year will be a brand new planet to Star Wars Battlefront II.

The colorful jungle world of Felucia will be arriving later in 2019 and is being built for Capital Supremacy. We can’t wait to take one of the most iconic planets of the Clone Wars era and bring it into the game.

Before we get to all of that, in July we’ll feature a month of weekly Community Quests themed around your favorite Clone Wars heroes & villains that will unlock new animated poses and VO lines for these characters. 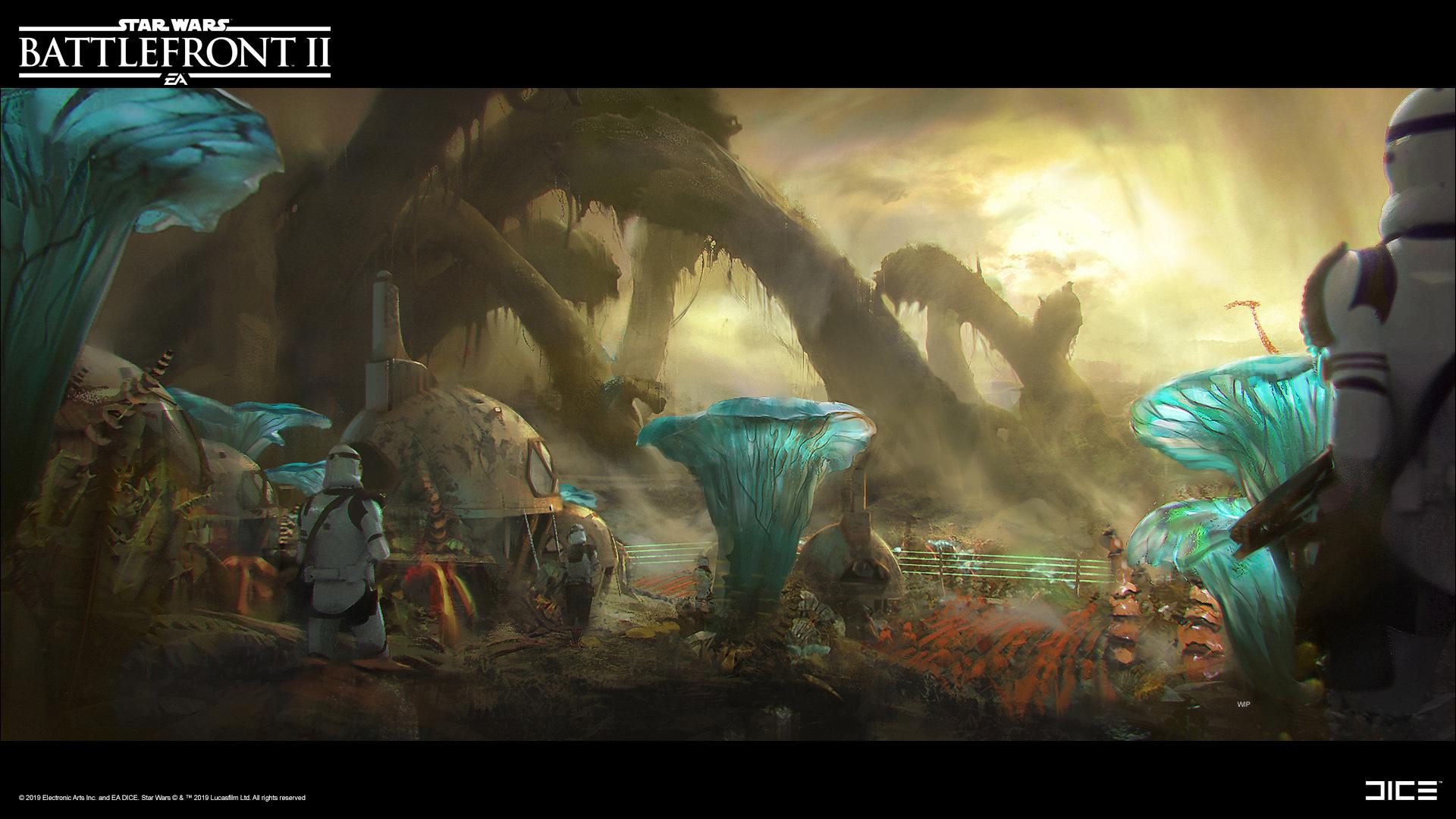 Concept Art for the planet Felucia

We’ll be back in August to talk more about the new ways to play, Felucia, and more. As always, we’re incredibly humbled by your ongoing support and passion for Star Wars Battlefront II. Please do keep all your feedback coming, and we’ll see you on the streets of Theed in just a few weeks time.