We’re just a few days away from Fortnite Season 4 at this point, but there’s still a lot we don’t about what the future holds.

Each day, Epic Games releases more teasers about the new season through in-game comic pages and also on their social media pages.

It appears that the teasers will be spelling out something across several different languages, and by the end of it all, Season 4 will begin.

There have been several teases already and more and more come out each day, so we’ve decided to rounded them all up and put them in one spot so we can analyze them.

Here’s a look at what we know so far about Fortnite Season 4 through teasers.

Every Fortnite Season 4 Teaser (So Far)

All Teasers so far pic.twitter.com/nWOhoIvo4j

Fortnite leaker FireMonkey took all of the teasers and put them together, and it looks like a word is being spelled out.

Some Brazillian players pointed out that it looks like it’s spelling out “Guerra,” which translates to “war” in English.

It appears the word “Nexus” is being spelled out in English, which could tie us back to the Butterfly event from all the way back in 2018.

Fortnite has been laying out a story for years now, and it’s looking like all of it is important.

It’s ALL connected. Pay attention. The story is about to kick into overdrive…

When the Fortnite Season 4 teasers first started coming out, Epic Games’ Donald Mustard noted that everything is connected.

This means the tie to the Nexus is definitely a real possibility and Galactus could have a major impact on the map if Thor isn’t able to stop it.

For those of you out there who thought this season would be just one giant ad for Disney and Marvel, it looks like there’s a whole lot more to it than just that.

Fortnite Season 4 begins on August 27 and all of our questions about to expect will be answered then. This is shaping up to be one of the more anticipated seasons in recent memory, so we’ll have to hope that Epic knocks it out of the park! 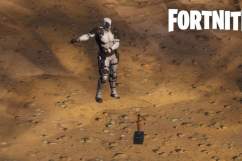 Where to Find Thor’s Hammer Ahead of Fortnite Season 4