A new feature found in Fortnite Season 7 is Alien Artifacts that’ll be used to claim additional styles for the Kymera outfit that’s found in the Battle Pass.

Anybody who purchases the Battle Pass or is a Fortnite Crew member will immediately unlock this skin and they’ll quickly discover that things work much differently this time around.

Battle Stars are now a thing and they let you unlock Battle Pass rewards in any order you’d like. You get 5 stars each time you level up, so it’s a sweet deal for players if they want to unlock things at their own pace.

Meanwhile, the Alien Artifacts are needed to customize the Kymera outfit. They can be found inside of the new Cosmic Chests or just on the island sitting around. Here’s where you can find them. 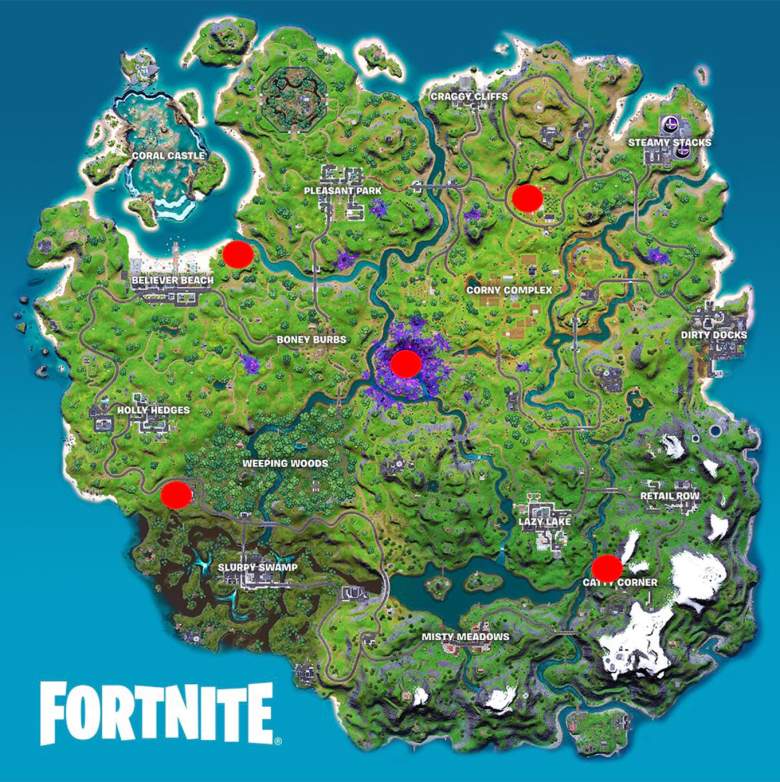 For starters, it looks like there is only a set number of artifacts that spawn each week, so you don’t have a ton of them to collect for the time being.

There are five spots across the map (that we know of) that have these artifacts. You’ll know them when you see them because they’ll just be glowing, floating purple canisters. None of them are all that difficult to find, but know this are heavily contested areas.

The one in the center in particular doesn’t have a ton of loot around it, so you might find yourself heading back to the lobby after swimming to it.

All you’ll have to do is go up to them and collect them to secure them for your upgrades. We don’t have the full details, but we assume we’ll be seeing these show up on the map more often as the weeks go by, so be on the lookout for that!

How to Customize Kymera 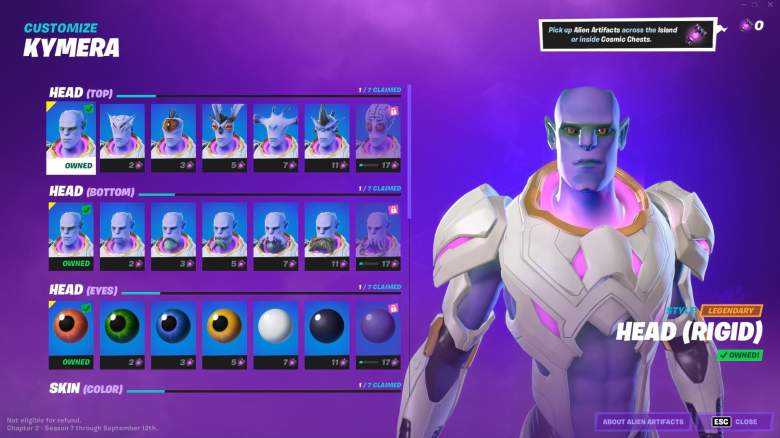 Once you get the artifacts, you’ll want to start customizing the new skin. You can do this by simply clicking on the Battle Pass tab and then choosing the “Customize Kymera” option on it.

That’ll take you to a screen where you’ll be able to change a wide assortment of things about the character such as the head, eyes, skin and armor.

It’s a lot like the Maya skin was back in Chapter 2 Season 2 where players could go down any path they wanted to make their ideal skin. Of course, you’ll need to load up on Alien Artifacts if you want to unlock it all, so make sure you get out there and collect them when they show up.

It looks like things will be starting off rather slow, but things will begin to pick up as the season goes on. If you start late, you might even find yourself finding the artifacts all over instead of rare spots.

For Week 1, none of them are in weird spots, so chances are that you would have found at least a few of them without even trying. Just make sure you actually do grab them when you see them.