Valentine’s Day is right around the corner and while it hasn’t been confirmed officially, there’s almost certainly going to be a special event in Fortnite.

This time of the year has typically been a time where Epic hands out a bunch of freebies for players, something that happens with pretty much any holiday, so we shouldn’t expect them to mix things up here.

We’ve already gotten a look at some of the upcoming items and even some of the fresh cosmetics we’ll be seeing, so the only thing that we’re actually waiting on is the start of the event itself.

Something else that’s rumored to return is the Cupid’s Crossbow weapon, a weapon that was never really all that strong, but with some tweaking, it’s looking like it could now be viable.

Interestingly enough, it came at the expense of raw damage output, but this is actually a good thing. Let’s take a look.

Cupid's Crossbow got updated in the v15.30 update we could see this for valentines stats below:

According to FNinformation, the Cupid’s Crossbow was updated in the most recent patch. What might be surprising is seeing that its damage has actually been lowered while the firing rate has been increased.

We haven’t seen the crossbow in action yet, but we imagine that shooting faster will make a big difference. The new damage is just 11 lower than it was before, but the shooting got a lot faster, so there’s definitely a lot of potential here.

It’s expected that this will be a weapon that’s sold by NPCs, much like the rest of the Exotics in Season 5.

When Can We Try it For Ourselves? 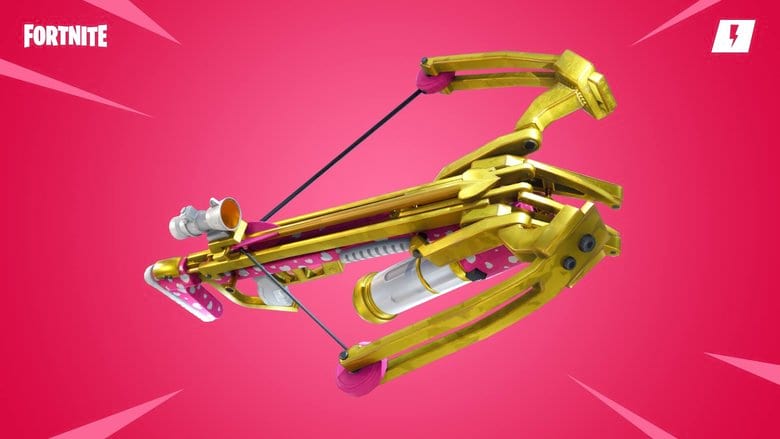 A lot of players are expecting there to be another update this upcoming week so we can really get prepared for the Valentine’s Day event.

There will likely be some sort of challenges for us to complete so we can get the free cosmetics, so be on the lookout for those.

Valentine’s Day is a week from the time of this writing, so we still have a little while longer to wait, but it should be here before we know it. Let’s just hope the crossbow is better than it was!

Loading more stories
wpDiscuz
0
0
Would love your thoughts, please comment.x
()
x
| Reply
The Cupid's Crossbow is about to get a lot better in Fortnite.