There are a lot of ways to earn XP to level up in Fortnite Season 5, but the easiest method will be completing the quests.

If you’re out the loop, quests are essentially just challenges that you know from the previous seasons, but renamed to fit the Season 5 theme.

One of the quests asks you to swim for long distances to earn some XP. While you can get this the normal way by swimming around in lakes or rivers, there’s actually a much easier way to do this, and you might want to get it done before Epic changes this.

Here’s what to do.

Swim on the Starting Island

Free XP glitch for the Mave swimming challenge! All you have to do is be swimming when you get teleported into the bus! from FortNiteBR

According to a video on Reddit uploaded by FTL_BocajioX, you can actually just be swimming around on this island and when you’re moved to the bus, it’ll automatically finish off a huge chunk of your progress.

I decided to test this for myself to double check, and it does indeed work. I actually didn’t even know I had a quest for swimming, which just goes to show how much I swim in Fortnite. 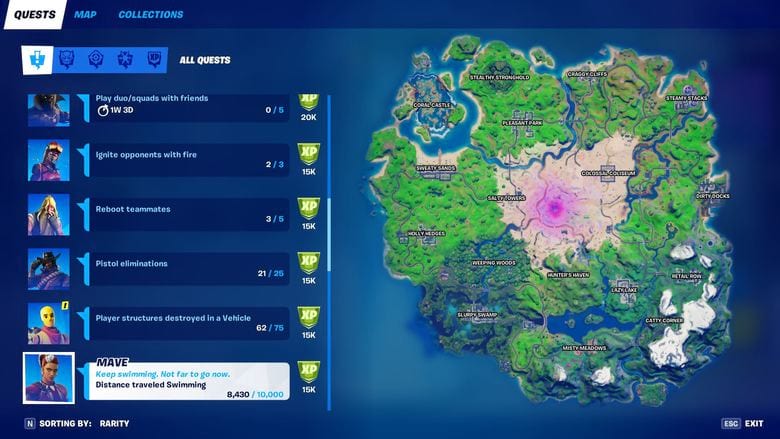 It looks like all you’ll need to finish off this challenge is to do this once or twice and it’ll be all set.

Will This Be Removed?

As it turns out, this has been an option for the entire season, so either Epic isn’t quite aware of it yet, or they just decided to leave it in.

Whatever the case may be, if you’re still trying to get this quest done, this will by far be the easiest way of doing it.

If you don’t want to feel like you’re exploiting, then feel free to keep swimming in the various waterways Fortnite has to offer across the map. There are plenty ways to earn XP this season, so don’t feel obligated to get this quest done right away.

READ NEXT: Fortnite Mandalorian Crash Site Getting “Some Changes”