As pregame rituals go, there’s nothing quite like the haka performed by New Zealand’s basketball team.

The Tall Blacks perform the dance before each game in the FIBA World Cup, and Tuesday’s game against the United States was no exception.

The dance is a ritual at rugby matches in New Zealand. As Marc Hinto of New Zealand-based Stuff.co notes, the dance has gotten a variety of reactions form teams at the World Cup.

In rugby matches, teams challenge each other to a pregame dance-off. So far, though, no one has accepted New Zealand’s challenge. Turkey’s players ignored the dance completely, while the Dominican Republic’s watched from the bench.

The United States players didn’t break into a dance of their own, but they did line up on the court and politely watch the dance before shaking hands with their opponents.

You can check out the video above and a couple of photos of the dance below. 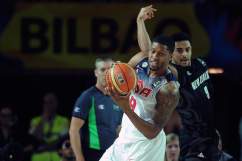