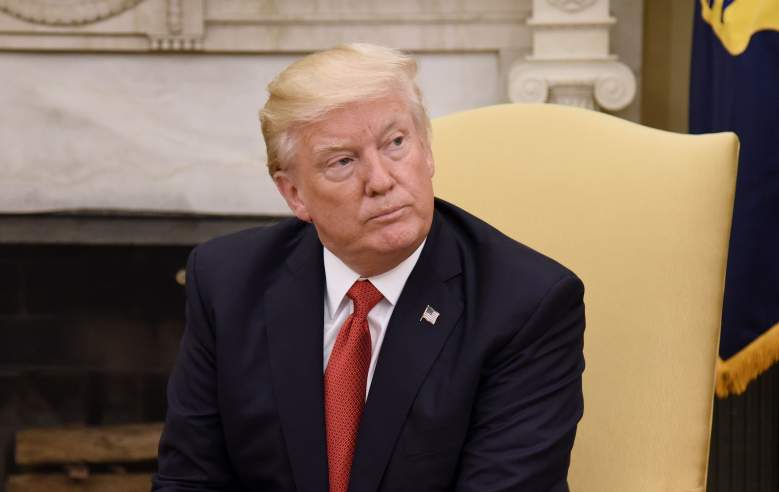 Donald Trump sent a lot of people – reporters included – scurrying for dictionaries when he mysteriously tweeted the word “covfefe” in a partial sentence that abruptly cut off.

Maybe it was an “alternate word”? Here’s the clause Trump wrote on Twitter in the early morning hours of May 31 to his 31 million followers:

“Despite the constant negative press covfefe”

Yes, that was the full tweet. Trump invented the word shortly after midnight on the East Coast. See for yourself:

Hours later, Trump apparently woke up, finally deleted the tweet, and wrote this one instead:

He also wrote about the Paris Accord, witch hunts, Kathy Griffin, and, for good measure, James Comey.

Trump’s press secretary, Sean Spicer was asked what the word meant at a press briefing later in the day on May 31 and said, “The president and a small group of people know exactly what he meant.” Spicer refused to explain or identify the small group of people who, for some reason, are the only people in the world capable of understanding that a made-up word means something.

“Do you think people should be concerned that the President posted somewhat of an incoherent tweet last night and that it then stayed up for hours?” a reporter asked Spicer, to which he responded, no.

Hillary Clinton then got into the covfefe game during a Twitter war with Donald Trump. “People in covfefe houses shouldn’t throw covfefe,” she tweeted in response to a tweet from the president that read, “Crooked Hillary Clinton now blames everybody but herself, refuses to say she was a terrible candidate. Hits Facebook & even Dems & DNC.”

Most people think he originally meant to write “press coverage,” and covfefe was a typo/spelling error. The strange tweet remained up for at least four hours after it first appeared (presumably Trump’s remaining press team was sleeping. After all, his communications director just quit). Meanwhile, as Trump’s crack crisis management team snoozed, more than 107,000 people retweeted the tweet in just a few hours, and it earned its own hashtag. This guy even bought the license plate:

People were baffled that the tweet stayed up so long, and, to be frank, it read more like its writer was interrupted, compounding the mystery.

It's been over TWO HOURS and #covfefe hasn't been deleted! Where are his handlers?

Media frantically typing #Covfefe on Google translate to see what it means in Russian. pic.twitter.com/0DubNBvs3C

Twitter had a field day over the covfefe kerfuffle (try saying that one fast).

The ending to Citizen Kane is starting to make a lot more sense. pic.twitter.com/OSy9tA9SWv

#covfefe I think he meant this pic.twitter.com/WiYtCpTKbH

"…being necessary to the security of a free state, the right of the people to keep and bear #Covfefe shall not be infringed"

One of the weirdest things about the tweet was the fact it just cut off in mid-sentence. This sparked a number of theories on Twitter. Maybe Trump fell asleep. Maybe something distracted him. Maybe he was trying to distract all of us from something else.

Did he fall asleep? Did he drop his phone in the toilet? Did Melania slap the phone out his hand? All of the above? I need answers. #covfefe

I like to imagine that "covfefe" is the exact moment someone tackled Trump and wrestled the phone out of his hand. https://t.co/96MAwttvdL

Maybe something serious happened. Twitter users pointed out that news broke about a blast in Kabul roughly around the same time Trump was tweeting about covfefe.

#covfefe was funny until I found out Trump learned that at least 67 people got blown up in Kabul #KabulExplosion at prob that very moment.

The Kabul explosion is obviously very serious, and time will tell why Trump tweeted what and how he did. CNN reported that the Kabul blast had killed at least 80 people and wounded 300 in a diplomatic area. According to CNN, it didn’t target the American embassy but was close to the German embassy.

New York Times reporters called the White House to ask what was going on with the covfefe tweet, and to make sure Trump didn’t suffer a medical emergency or something horrible like that, but no one got back to them.

Others speculated that Trump was distracted by this:

The person who runs the Merriam-Webster Twitter page rolled out of bed, posted this, and then went back to sleep like most of America:

Not to be outdone, the Urban Dictionary rushed out a definition: “It literally means covfefe. Originated from Donald Trump’s tweet: ‘Despite the constant negative press covfefe’ ‘It’s time to nuke this place down.’ ‘What’s the code?’ ‘covfefe.'” Yes, that’s actually what they wrote.

Other politicians weighed in.

By the end of the night, my phone will think #covfefe is a real word and won't try to autocorrect me. What a time to be alive. pic.twitter.com/Y6emtjNbi7

USA Today points out that, even if the president meant to write “despite the constant negative press coverage,” it’s still not clear what he was talking about since the sentence cuts off.

That’s quite a typo even for a president who’s been ridiculed for them in the past (honered and tapp topped the list previously. See Trump’s top Twitter spelling errors here.) The tweet also begs the question, of course, as to what the Leader of the Free World was doing up so late tweeting strange words that no one’s ever heard of before. According to The Guardian, the “covfefe” tweet “in question had been sent from the Twitter app on an iPhone,” which is known to be Trump’s current device.

Prince did it better. #covfefe pic.twitter.com/f20da18PQC

If you google the words “Trump covfefe,” Google suggests you might want to check out “Select by Trump Tower Coffee Single-Cup Coffee for Keurig K-Cup Brewers, 12 Count” on Amazon.

What do you think Trump meant to say? Put your thoughts in the comment thread.

Debate raged as to how one pronounces the newly minted word covfefe anyway. This was one guy’s theory:

cō•feef (stress is on the 2nd syllable)

You can take a poll here.

The Trump covfefe tweet immediately subjected the president to mockery as thousands of night owls retweeted it and mocked the president for his odd late night tweet. Trump, of course, has used Twitter as no president before, and it’s not the first time that the president’s tweets have had spelling errors in them. Usually, though, he doesn’t come up with completely new words.

Tomorrow we'll learn COVFEFE was today's launch sequence. So laugh it up now.

Some people are comparing the covfefe tweet to former Senator Scott Brown’s “Bqhatevwr” tweet. That’s what Brown wrote to an online critic. He later blamed it on a pocket dial and the small keys on his iPhone. “Anyone ever hear of pocket tweet, pocket dial? I mean it was pretty simple,” Brown said, according to The Washington Post.

Some just saw an opportunity.

Lol someone bought all of the #Covfefe URLS pic.twitter.com/Qc5wWV1UlX

Much has been written about Trump’s novel use of Twitter. He says he uses it to communicate with people outside the media filter and, of course, supporters argue he won the election doing things his way. Recent reports indicated that his lawyers might start vetting his tweets, though. Judging from “covfefe,” it doesn’t appear that anyone’s vetting them yet.

Trump didn’t delete the covfefe tweet until 6:09 a.m., and apparently he’s not offering an explanation – or a definition.

Here are some of the other tweets Trump later sent out Wednesday morning, about Russia and Kathy Griffin:

So now it is reported that the Democrats, who have excoriated Carter Page about Russia, don't want him to testify. He blows away their….

…case against him & now wants to clear his name by showing "the false or misleading testimony by James Comey, John Brennan…" Witch Hunt!

POLL: How Does One Pronounce Trump’s ‘Covfefe’ Anyway?

Read some of the memes about the Trump covfefe tweet here: 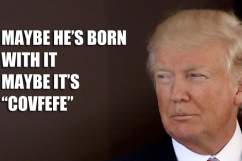 Donald Trump & ‘Covfefe’: All the Memes You Need to See