Getty Trump during his 2017 address.

Tonight is President Donald Trump’s first official State of the Union address. It’s scheduled to start at 9 p.m. Eastern and comes during a precarious but also prosperous time in the Presidency. Robert Mueller is investigation potential Russian interference in the 2016 election and exploring whether or not there were links between that and Trump’s campaign. Meanwhile, Trump’s administration is experiencing economic success as the Dow reaches historic highs and unemployment decreases. But the administration is also experiencing fallout from its actions on the environment and immigration. How much of the controversy Trump’s speech will address tonight remains to be seen. But it’s definitely something you’ll want to watch live as it happens.

Trump’s SOTU speech takes place at 9 p.m. Eastern tonight, January 30, 2018. You can watch it broadcast live on TV on all the major news networks, including NBC, ABC, CBS, Fox, CNN, MSNBC, CSPAN, PBS, and more. All the major stations will also broadcast the Democrat response immediately after. If you know what station you want to watch but you’re not sure what channel it’s on in your region, there’s an easy way to find out. Just click here to go to TV Guide’s listings. Then change the “Provider” (right under TV Listings) to your local provider. You’ll be able to scroll down to see what channel the station you’re looking for is on for you.

Here’s more information about what some stations are specifically planning for the State of the Union tonight.

ABC will cover the speech and the Democratic response from 9 to 11 p.m. Eastern. Click here to access the ABC channel finder and locate your local station.

NBC will cover the speech and the Democratic response from 9 to 11 p.m. Eastern. Click here to access the NBC channel finder and location your local station.

CBS will cover the speech and the Democratic response from 9 to 11 p.m. Eastern. Click here to access the CBS channel finder and location your local station.

Fox will be devoting its regular programming to cover the State of the Union, from 9 to 10:30 p.m. Eastern. Click here to access the Fox channel finder and location your local station.

CNN will cover the State of the Union address from 9 to 11 p.m. Eastern.

C-SPAN‘s programming will begin at 8 p.m. Eastern with Greta Brawner and Peter Slen previewing the speech with experts and taking viewer calls, tweets, and Facebook comments. Former House Sergeant at Arms Bill Livingood will provide firsthand information on the choreography and security of the evening leading to the president’s arrival on the House floor. The station will then cover the speech live in its entirety, and show the Democratic response live in its entirety. After the speech, Greta Brawner and Peter Slen get audience reaction calls, tweets, and Facebook comments. On C-SPAN2 after the speech, C-SPAN2 will be in Statuary Hall in the U.S. Capitol getting reaction from members of Congress. C-SPAN will then re-air the President’s speech in its entirety at 11 p.m. Eastern.

FOX Business Network is showing live coverage of the State of the Union tonight. Lou Dobbs is kicking off coverage at 7 p.m. Eastern with Lou Dobbs Tonight live from DC. At 8 p.m. Eastern, Neil Cavuto will lead the coverage with a special edition of CAVUTO Coast to Coast. Joining Cavuto will be Dobbs, FBN’s Maria Bartiromo, and Trish Regan. Additionally, Washington correspondents Blake Burman and Connell McShane will be reporting from the White House and Capitol Hill. At 11 p.m. Eastern, Regan will host a special primetime edition of The Intelligence Report with Trish Regan, where she’ll be joined by a rotating panel of industry experts. 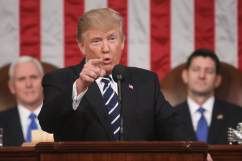 Read More
Breaking News, Donald Trump, Politics, SOTU
Here's which TV stations and channels will be airing the State of the Union tonight, and what time you can watch.