College Station is no stranger to dual threat quarterbacks so it was no surprise when Kyle Allen committed to Texas A&M. The Aggies quarterback was recruited by as many top colleges as you can name. In his short time at Texas A&M, he has lost the starting quarterback job and won it back. Allen’s playmaking abilities have led to a fast start for the Aggies.

Aside from football, he can be seen frequently on Twitter and Instagram. He is also in the midst of a long distance relationship with his girlfriend who attends the University of Arizona.

Here’s what you need to know about the Texas A&M quarterback:

1. Allen Was a Five-Star Recruit

According to Yahoo Sports, Allen was a five star recruit coming out of high school. Allen played at Desert Mountain in Scottsdale, Arizona. He received scholarship offer from all over the country including Alabama, Arizona State, Notre Dame and Ohio State. Ultimately, Allen committed to the Aggies. 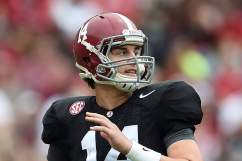 2. His Girlfriend Goes to the University of Arizona

"Good women are rare, but none of them even come close.. "

Allen frequently uses both Twitter and Instgram. He often posts pictures like the one above of his girlfriend Summer Juraszek who attends the University of Arizona. Meanwhile, his Twitter feed is full of quotes and shoutouts to Aggies fans.

The couple seems to use social media to display public affection:

Looks like I'll be seeing @KyleAllen_10 in two weeks ?❤️

Allen played amazing in the Aggies bowl game against West Virginia his freshman year. He threw for 294 yards and four touchdowns. Allen also had a rushing touchdown towards the end of the fourth quarter to put the game away.

It was just his fifth career start during his freshman season. His solid play in the Aggies last game of the 2014 season set the tone for his strong start to the 2015 season.

4. He Threw for 358 Yards Against Arkansas

During his sophomore season, Allen led the Aggies to a 5-0 start. One of those included an overtime win against Arkansas. It was on the most impressive games of Allen’s career. He was 21-of-28 for 358 yards and two touchdowns. He also threw for 322 yards the following game against Mississippi State.

Kyle Allen is off to a great start for TAMU. (Getty)

Despite entering his college career with much acclaim, Allen lost the starting quarterback battle to Kenny Hill is freshman year. According to 247 Sports, Allen was thinking about transferring to a different school. After Hill’s red hot start, it all started to crumble.

Allen began getting starts towards the end of his freshman season. In the end, it was Hill who ended up transferring to TCU. Allen has been much improved since he first arrived at College Station.

Read More
College Football, Football
Kyle Allen has the Aggies off to a fast start. Find out more about the quarterback both on and off the football field.