Wladimir Klitschko looks to retain his collection of world titles when he faces Tyson Fury tonight at the ESPRIT Arena in Düsseldorf, Germany.

In the U.K., the Sky Sports Box Office telecast starts at 7:00 p.m. UK time, and the main event is expected to hit the ring at around 10 p.m.

“[Klitschko’s] nightmare has become a reality and on November 28, I’m doing what he was unable to do first time round – I’m turning up,” said Fury, referring to Klitschko’s postponement of their originally scheduled October date due to a calf injury. “I’ll then do what Wlad’s been unable to do his entire career – put on a show, entertain the fans and send them home happy. Mark my words: I will become heavyweight champion of the world on November 28.”

He sounds like he means business. Check out Fury’s now-famous Bat-entrance to a recent press conference: 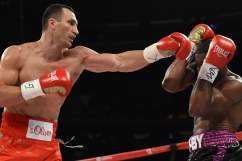