Deontay Wilder takes on Artur Szpilka tonight in Brooklyn. But what time is the fight? (Photo: Ed Diller/DiBella Entertainment)

Deontay Wilder (35-0, 34 KOs) will make the third title defense of his WBC World heavyweight belt tonight when he takes on one of his toughest assignments yet, Artur Szpilka (20-1, 15 KOs), at Barclays Center in Brooklyn, New York. But what time does the broadcast begin? And when will the main event hit the ring?

The Charles Martin vs. Vyacheslav Glazkovfight co-feature kicks off the live Showtime broadcast at 10 p.m. ET/ 7 p.m. PT, and the first bell for the main event between Wilder and Szpilka should be around 11 p.m. ET.

“This is a great card,” Wilder said at the final presser before tonight’s encounter. “Two heavyweight title fights in one night. It doesn’t get much better than that. The heavyweight division is exciting again. Having someone like me, it’s only going to get better.”

Here’s another way tonight’s fight just got better for fans! The good people at Showtime are making tonight’s two heavyweight title bouts available on the SHOWTIME Sports YouTube page for FREE! Hello! Click to be taken to the live stream.

Click here for a preview and prediction for Wilder vs. Szpilka. 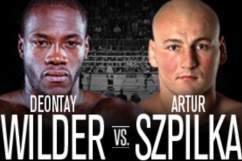 Wilder vs. Szpilka Live Stream: How to Watch Online Free

Read More
Boxing, Showtime
Deontay Wilder takes on one of his toughest assignments in Artur Szpilka. But what time does the broadcast begin? And when will the main event hit the ring?