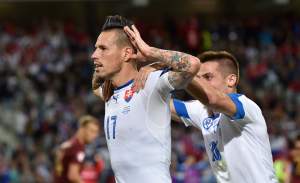 Slovakia is thinking upset on Monday, as a win over England would see the team advance to the Round of 16. England are in the group driver’s seat with four points, but looked lost on the field for stretches against both Russia and Wales.

England are full strength for their final group match, but they still have lineup decisions. The attacking of Roy Hodgson’s squad has been inconsistent, and he needed three offensive subs to turn the tide against Wales. Jamie Vardy has yet to start but scored against Wales, while Harry Kane has struggled in the middle. The two forward men can’t both play at once, forcing Hodgson to make a decision before the games really matter next week.

The difference man for Slovakia will be Marek Hamsik. The Napoli midfielder has played a major impact on both his team’s group games, and was involved in both goals during the team’s 2-1 win over Russia.

Read More
Soccer, TV
Slovakia need a win over England in their final group match to make a push for the next round.