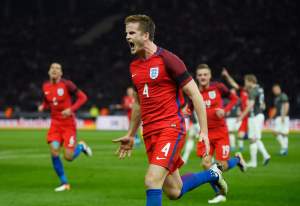 England will battle Russia in their Euro 2016 opener. (Getty)

Russia stunned England with a stoppage time header to end the match in a 1-1 draw. England looked in control for much of the match and was minutes away from walking away from the opening match.

England scored on a free kick, but it proved to be not enough to win the match. At the end of the first day of match play for Group B, Wales leads the group with three points.

It was one of the contests soccer fans had been circling since the tournament schedule was released. England has been playing great and the team is ranked 11th in the world while Russia is ranked 29th.

Russia’s next match is Wednesday, June 15 against Slovakia. England plays Wales in a massive matchup on Thursday, June 16.

The two teams are in Group B with Wales and Slovakia.

Here’s what happened so far.

It appeared England would win the match 1-0, but Russia pulled off a late surprise. Russia scored on a last minute header in stoppage time to steal a draw.

England Went Up 1-0 on a Free Kick

After a scoreless match, England finally found the back of the net. Eric Dier scored on a free kick late in the second half to score the first goal by either side. As the goal moved, Dier found the top left corner of the net.