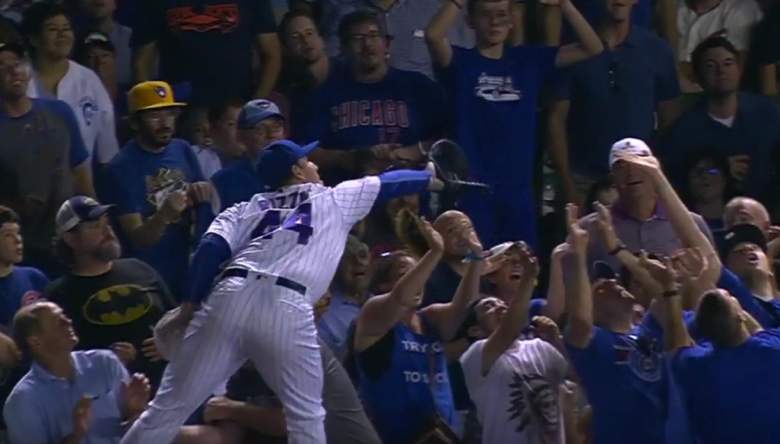 Chicago Cubs‘ first baseman Anthony Rizzo ran behind the tarp at Wrigley Field, hopped up on the ledge and caught a foul ball Tuesday night in a game the Cubs would win 4-1 over the Milwaukee Brewers.

The foul ball came off the bat of Keon Broxton in the 5th inning. Fans chanted “MVP, MVP,” after the snag, according to the Chicago Tribune.

Rizzo goes tightrope on wall for incredible catch in stands. Crowd chants MVP as he waved his glove .

Twitter exploded with cheers, too, along with Gold Glove talk:

That catch by itself is worth a Gold Glove for Rizzo.

No way, no freaking way with that Rizzo catch. He runs to the wall, stands on it, and just casually reaches into the stands to make a catch

As the Tribune pointed out, Rizzo made a similar catch this time last year — with the same pitcher on the bump and facing the same team. The difference, however, was Rizzo fell into the crowd in 2015.

Here’s the video from last year: