Gonzaga’s March Madness success has many fans curious about the location of the university. While many schools have their location in the name, Gonzaga is much more mysterious.

Gonzaga is located in Spokane, Washington. The Eastern Washington school is about a four and a half hour drive from Seattle. The school was founded in 1881 under the charge of Jesuit priests and originally open to young men who were looking to become priests.

The school is named after Saint Aloysius Gonzaga, a saint who chose to enter the Society of Jesus to care for victims of the plague. He denounced his family’s wealth that was headed his way and eventually contracted the disease which caused him to die at 23 years old.

Today, the private school still has Jesuit roots but is open to both men and women pursuing a variety of careers. According to Gonzaga, 7,572 students were enrolled in the 2016-17 academic year.

“The Gonzaga experience fosters a mature commitment to dignity of the human person, social justice, diversity, intercultural competence, global engagement, solidarity with the poor and vulnerable, and care for the planet. Grateful to God, the Gonzaga community carries out this mission with responsible stewardship of our physical, financial and human resources,” Gonzaga describes its mission as part of its four paragraph mission statement.

Sports fans are most familiar with Gonzaga as an emerging basketball powerhouse. The Bulldogs once played the role of Cinderella but have become one of the more iconic basketball programs in the country. Gonzaga made its 20th NCAA tournament appearance in 2017, and it is the team’s second time as a number one seed.

The school made its first tournament in 1995 but did not win a tournament game until 1999. Mark Few took over as head coach prior to the 1999-2000 season and has been with the program ever since despite receiving interest from bigger programs.

Few is an avid fisherman and loves all the outdoor opportunities living in Spokane provides. He explained why he has stayed at Gonzaga so many years on The Seth Davis Show (via Campus Insiders).

“When you see how Gonzaga does everything, and you see the type of guys that Gonzaga is getting in, and my lifestyle, and you get to know me, then I think they kind of go, ‘Oh, OK. I get it,’ ” Few told Davis.

The Bulldogs play in the West Coast Conference, which is considered a conference for mid-major schools. Gonzaga is frequently invited to play in tournaments with schools in much bigger conferences like the ACC and Big Ten. The team has gone from consistently entering the tournament as a double-digit seed to becoming one of the favorites to win March Madness. 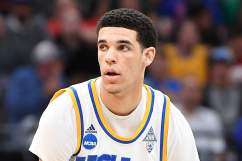