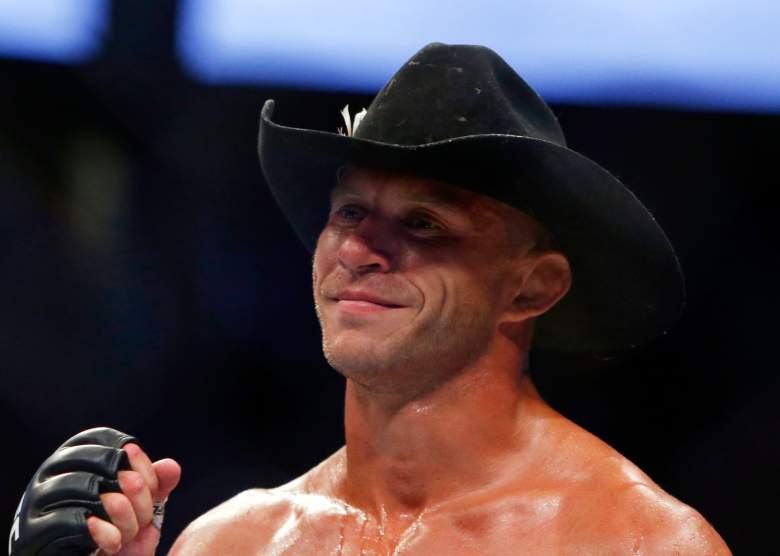 Saturday night at the Air Canada Centre in Toronto No. 2 Max Holloway and No. 5 Anthony “Showtime” Pettis fought for the interim 145 pound (featherweight) title. Expected to be a close fight, Holloway grabbed control of the proceedings almost from the start before ultimately stopping Pettis 4:50 into the third round. Holloway is now the interim UFC featherweight champion, and he’s now in line to face Jose Aldo in the very near future.

Holloway is now 18-3-0 in his MMA career, and he’s won his last ten fights. With the defeat Pettis dropped to 19-6-0, and in his post-fight interview he stated that he injured his right hand during the first round. Pettis failed to make weight for this fight, weighing in three pounds over the 145-pound limit and thus being required to give Holloway 20 percent of his purse. And following the fight Pettis also stated that he will be going back to 155 as a result of the troubles he experienced in making weight at 145.

Below are the other results from UFC 206 in Toronto.

Jordan Mein (170 lbs.) vs. Emil Meek (170.5 lbs.)
Outside of the first round, when Mein got off to a good start, Meek was the better fighter of the two as he won by unanimous decision. Meek, who said after the fight in his interview with Joe Rogan that he injured a rib during the first round, landed 91 total strikes to just 38 for Mein according to the UFC’s unofficial stats. Most of the second and third rounds were fought on the ground, where Meek had a decided advantage. Meek is now 9-2-1 in his MMA career, with Mein dropping to 29-11-0.

No. 10 Tim Kennedy (186 lbs.) vs. Kelvin Gastelum (185 lbs.)
Fighting for the first time in more than two years, Tim Kennedy entered the octagon to face an opponent in Kelvin Gastelum who needed to pick up a win to keep his career on the right track. Gastelum, who in the past has cut weight to fight at 170, looked incredibly sharp throughout the fight, which he managed to end 2:45 into the third and final round by knockout. Gastelum, who controlled the fight against a veteran in Kennedy who looked equal parts rusty and overwhelmed, moved to 14-2-0 in his MMA career with Kennedy dropping to 18-6-0.

No. 4 Cub Swanson (146 lbs.) vs. No. 11 Dooho Choi (145.5 lbs)
Not only was this the best fight of the night, but it will also go down as one of the best fights of the entire year. Swanson and Choi exchanged powerful strikes throughout the fight, with Swanson winning by unanimous decision by scores of 30-27 on two cards and 29-28 on the third. A total of 247 strikes were landed according to UFC’s unofficial stats, with Swanson landing 123 and Choi 124. At the end of the fight the crowd in Toronto responded with their loudest cheers of the night, as the fight provided some much-needed action on a night that to that point didn’t produce much in the way of explosive action. With the win Swanson moves to 24-7-0 in his MMA career, with Choi falling to 14-2-0.

No. 5 Donald “Cowboy” Cerrone (170.5 lbs.) vs. No. 14 Matt Brown (171 lbs.)
Lando Vanatta has some competition for the Knockout of the Night. After fighting two highly competitive rounds, the match between Cerrone and Brown came to an end 34 seconds into the third and final round as Cerrone connected with a left-footed kick right on Brown’s jaw. Brown was knocked out immediately, with the referee calling a halt to the fight as one would expect. With the win Cerrone is now 32-7-0 in his MMA career, with 19 of those wins coming in the UFC. Brown dropped to a record of 22 wins and 17 defeats in his MMA career.

Mitch Gagnon (135 lbs.) vs. Matthew Lopez (135 lbs.)
In what was a competitive fight, Lopez moved to 9-1-0 in MMA with a unanimous decision victory over Gagnon (12-4-1), with all three judges scoring the fight 29-28 in Lopez’s favor. The fight could have been over in the first round, as Gagnon landed a quality strike that stunned Lopez and sent him to the mat. But Lopez was able to do just enough to avoid a stoppage, and in the second round his grappling skills were superior to those of Gagnon. That set up the decisive third round, which began with Gagnon mistakenly kicking Lopez in the groin. After allowing Lopez the time needed to recover from the low blow, the two fought an even final round that sent the match to the scorecards.

No. 9 Valerie Letourneau* (117.5 lbs.) vs. Viviane Pereira (115 lbs.)
Brazilian Viviane Pereira moved to 12-0-0 in her MMA career with a win by split decision over Valerie Letourneau (8-6-0). The fight between Letourneau and Pereira was essentially two fights within one, with Letourneau’s length giving Pereira trouble during the first round and into the second. But eventually Pereira was able to get on the inside and thus be more effective with her strikes and takedowns. While Letourneau held the upper hand early she wasn’t dominant, which left the door open for Pereira to grab the win by decision.

Swinging to the finish! Who took home the W on your scorecard? #UFC206 https://t.co/VENcV35i15

Olivier Aubin-Mercier (155 lbs.) vs. Drew Dober (155 lbs.)
While Letourneau wasn’t as fortunate in her fight, another Montreal native picked up a win in dominant fashion. Aubin-Mercier moved to 10-2-0 as he defeated Dober by submission with a rear naked choke 2:57 into round two. Aubin-Mercier was the better striker of the two, and his power opened the door for the win by submission. Dober dropped to 17-8-0 with one no contest in his mixed martial arts career.

No. 8 Nikita Krylov (205 lbs.) vs. No. 13 Misha Cirkunov (205 lbs.)
Cirkunov was in control for most of the first round, and he picked up his sixth career win by submission via guillotine choke hold 4:38 into the opening round. Cirkunov stunned Krylov with a left hand that sent to the latter to the mat, and from there it was all about Cirkunov finding the proper submission hold to finish the fight. Cirkunov, who is 4-0 in the UFC, is now 13-2-0 in his MMA career will move into the top ten of the light heavyweight division. Krylov dropped to 21-5-0 in his MMA career with the defeat.

No. 7 Zach Makovsky (125 lbs.) vs. No. 11 Dustin Ortiz (125 lbs.)
Ortiz moved to 16-6-0 in MMA with a victory by unanimous decision in the first fight of the night. According to UFC stats Ortiz landed 61 percent of his strikes, and he was much busier in that regard than Makovsky (19-8-0). While Ortiz was recorded to have attempted a total of 148 strikes, the UFC stats had Makovsky attempting 54 (56 percent success rate). The second round was where Ortiz separated himself, landed 47 strikes to just seven for Makovsky.

Jason Saggo (155 lbs.) vs. Rustam Khabilov* (158.5 lbs.)
Khabilov, who failed to make weight for this fight, moved to 21-3-0 in his MMA career with a unanimous decision victory over Saggo. Khabilov was superior in the unofficial UFC strike stats, landing 60 percent of his attempts and finishing with 90 successful strikes to just 43 for Saggo (12-3-0). Khabilov landed 42 successful strikes to just 19 for Saggo, and he recorded four takedowns as well.

John Makdessi (155 lbs.) vs. Lando Vannata (155 lbs.)
Vannata moved to 9-1-0 with a first round knockout of John Makdessi, 3:21 into the first of three scheduled rounds. Vannata finished the fight with an outstanding spinning back kick that nearly knocked Makdessi (14-6-0) out unconscious. Eight of Vannata’s nine career MMA wins have been stopped ahead of the final bell, and this finish will go down as one of the knockouts of the year in the UFC.

INCREDIBLE way for Lando Vannata to get his first win! #UFC206 https://t.co/VedB9ZxlV1

* – Pettis, Letourneau and Khabilov failed to make weight for their respective fights. As a result, each will forfeit 20 percent of their fight purse to their opponent. 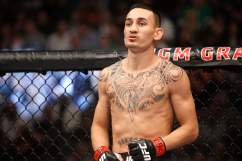