The Boston Police Department has announced that three additional people are in custody in connection with the Boston Marathon bombings, and are charged with providing “some form of help after the attack.”

One of the new suspects is19-year-old UMass student Azamat Tazhayakov; a college friend of accused Boston bomber Dzhokhar Tsarnaev. He has been held since April 20 on immigration charges but is now implicated in the bombing investigation.

Here is what we know about him. 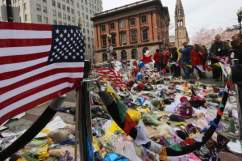 3 New Suspects in in Boston Bombing; ‘Backpack of Fireworks’ Cited

Tazhayakov is currently enrolled at UMass Dartmouth where he met bombing suspect Dzohar Tsarnaev. Attorney Robert Stahl, told AP, Tazhayakov came into contact with Tsarnaev because he also spoke Russian. According to FBI affidavit, although they met when they were freshman in 2011, their friendship strengthened after fall 2012 when Tsarnaev began hanging out at Azamat’s apartment.

Azamat and his roommate Dias Kadyrbayev were led out of their apartment last week in handcuffs after which police carried out an extensive search of their home.

On April 26, authorities found Tsarnaev’s backpack in a landfill near the duos home. 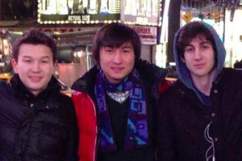 Police say Azamat Tazhayakov along with his roommate and fellow Kazakh, Dias Kadyrbayev, took Dzhokhar Tsarnaev’s laptop and backpack from his dorm room.
AP reports Dzhokhar Tsarnaev’s friends removed a backpack containing fireworks emptied of gunpowder from his dorm room at the UMass Dartmouth three days after the attack. Affidavit says that Tazhayakov along with other suspect Kadrybayev agreed to help get rid of the backpack after news reports concluded Dzhokhar Tsarnaev was one of the bombers. In the FBI affidavit it was reported that Kadyrbayev told authorities the the friends then “collectively decided to throw the backpack and fireworks into the trash because they did not want Tsarnaev to get into trouble.” Dzhokhar’s laptop was also taken because they “did not want Tsarnaev’s roommate to think he was stealing or behaving suspiciously by just taking the backpack.”

CBS reports that the suspects were arrested for “harboring or aiding the suspects after the fact” and that they are in the custody of the FBI. Tahayakov is facing obstruction of justice charges. If convicted, Kadyrbayev and Tazhayakov could get up to five years in prison and a $250,000 fine, says AP.

3. Tazhayakov Not Believed to be Connected to Bombings

Gov. Patrick: It’s my understanding the new suspects in custody did not have a role in the bombing, investigation continues #fox25

None of the three apprehended suspects have been connected to the planning or the detonation of the bombs that killed three people and injured more than 260 others near the finish line of the Boston Marathon on April 15. AP reports that Governor. Deval Patrick, who was briefed on the investigation, said the suspects had nothing to do with the bombings but helped the suspect after the fact.

Having said that, the FBI said that about a month before the bombing, Tsarnaev told Tazhayakov and Kadyrbayev that “he knew how to make a bomb”. His lawyer (displayed in the video above) affirms Tazhayakov did not know Tsarnaev was involved in the Boston marathon tragedy when the backpack and laptop were taken.

Alan Dershowitz, a prominent defense attorney and Harvard law professor told CNN that the obstruction charges are “weak” and suggested that the charges are being used to pressure suspects into providing more information about Tsarnaev “If that’s the best the feds have now, then they’re just squeezing,” Dershowitz told CNN. “It doesn’t sound like they have very much new here.”

4. He’s a Native of Kazakhstan

Tazhayakov is from Kazakhstan and graduated from Miras International School in 2011. He is in the United States on a student visa.

The suspect’s Twitter page reveals the UMass student is a soccer fan,  and like Dzhokhar, Tazhayakov is apparently a fan of the team Barcelona . He also posted the viral comedic video “Ahmed the terrorist”.

Here is the entire FBI affidavit that implicates Tazhayakov: