A British race car driver who played his own father in the movie Rush is dead after a crash this morning at an Australian racetrack.

Sean Edwards, 26, son of famed Formula One driver Guy Edwards, was riding in a Porsche 966 that spun out of control and smashed a wall at the Queensland Raceway in the town of Willowbank, near Brisbane.

Here’s what you should know about Edwards, his tragic death, and his inspiring life …

1. He Was in the Passenger Seat

Edwards has recently arrived in Australia, reportedly as an instructor, and was giving a private lesson at the Queensland Raceway when he died. The car was badly mangled, and Edwards remained trapped for an extended time as crew struggled to extract him.

Will Holzheimer (right) was taking a lesson from Edwards when the Porsche crashed.

The driver, according to the Courier Mail, was 20-year-old Australian Will Holzheimer:

Holzheimer, whose family own Dellow Racing, was trapped in the wreck for three hours while emergency services workers cut him free.

Edwards was British but lived in Monaco.

2. His Father is Famous for Rescuing a Driver From a Fiery Crash

In the movie Rush, Edwards plays his real-life father, Guy Edwards, a driver who famously pulled Niki Lauda from a burning wreck at the 1976 Nurburgring Grand Prix in Germany (above; skip to 1:05). Lauda is a main character in the movie.

3. He Was Recently Engaged

4. He Was Buddies With Another Driver Who Died in a Crash This Year

Edwards was good friends with Allan Simonsen, who died at Le Mans this summer. Edwards even carried Simonsen’s name on his race car after the tragedy. 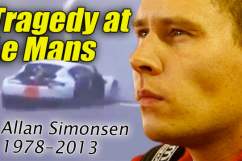 5. He Was Having the Best Year of His Career

Edwards was atop the Porsche Supercup standings at the time of his death:

According to famed driver Allan McNish:

I knew his father initially from his sponsorship days, so I have followed Sean’s career a wee bit closer than you would normally do. The tragedy of it is he was leading the Supercup championship after such strong performances through the middle of the year. It looked like he was going to win. Also, having won the Nurburgring 24 Hours this year (with Mercedes), I would say this was probably his strongest year in racing.

To get a feel for Edwards’ driving technique, watch the amazing video above, shot from an onboard camera at a 2011 GT3 Cup race in Germany.

Loading more stories
wpDiscuz
1
0
Would love your thoughts, please comment.x
()
x
| Reply
Sean Edwards, 26, was recently engaged and was having the best year of his career.