Former Microsoft CEO Steve Ballmer is buying the LA Clippers from Donald Sterling. Learn more about this sale, and about Ballmer himself, with the interesting facts below.

Get a fresh perspective on the record-setting price of the Clippers in the audio report above.

The $2 billion sale of the LA Clippers between the Sterling family and Steve Ballmer went through late in the evening on May 29.

“A source close to the situation told ESPN’s Ramona Shelburne that [Shelly] Sterling and Ballmer signed the final papers of the sale shortly before midnight Thursday at the offices of her Los Angeles-based attorneys. Sterling announced she was acting under her authority as the sole trustee of the Sterling family trust, which owns the Clippers.”

Former Microsoft CEO Steve Ballmer Said To Buy LA Clippers For $2BAccording to the LA Times, Steve Ballmer, best known for his long tenure as the CEO of Microsoft, is reportedly set to purchase the Los Angeles Clippers basketball team for $2 billion. Previously, he had been tipped to bid $1.8 billion for the team. This is not Ballmer's first time basketball rodeo. He previously tried to keep the Seattle Supersonics in the city before the NBA squad moved to Oklahoma City to become the Thunder. Ballmer later tried to buy the Sacramento Kings and move them to Seattle. Ballmer has indicated that if successful in buying the Clippers, they would remain in L.A.2014-05-30T13:05:56.000Z

Lean more about the Ballmer-Sterling deal in the video above.

Ballmer’s purchase of the LA Clippers comes at an opportune time. Donald Sterling, the prior owner of the Clippers, made headlines last month after making some racist remarks. Subsequently, Sterling was banned for life from the NBA. The fines Sterling faced totaled $2.5 million, which seems like barely a drop in the bucket compared to what Sterling just got for selling the team to Ballmer.

Ballmer is a far less controversial figure than Sterling. That being said, while Ballmer hasn’t been involved in any racial controversies, some tech insiders found Ballmer’s Microsoft strategies to be controversial. For example, he engaged in a reorganization effort that some Microsoft employees disagreed with.

Additionally, some people find Ballmer’s over-exuberance at public events to be disconcerting. You can see an example of Ballmer’s over-the-top energy in the video below.

Listen to the report above to learn more about Steve Ballmer’s past.

The LA Times notes that Ballmer was employed at Microsoft until this past February. His CEO tenure began in January of 2000. Ballmer joined Microsoft back in 1980, about five years after the tech company was founded.

In the video above, you can see Steve Ballmer’s reaction to the original iPhone. His scoffing dismissal of the iPhone is funny, given how the iPhone has gone on to dwarf the Windows phone line.

Last year, Ballmer considered buying the Sacramento Kings and moving the team to Seattle. However, that deal did not go through. It seems like Ballmer finally has the sporting influence he has long desired.

5. Steve Ballmer Has a Net Worth of $20 Billion

In the video above, you can see an emotional Ballmer giving his final public speech at Microsoft.

Ballmer is worth about $20 billion, according to Forbes. Additionally, his Forbes profile notes that he is married with three kids. He holds a degree from Harvard, but dropped out of Stanford. For a college drop-out, he appears to be doing alright for himself. 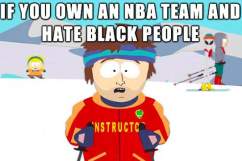 Donald Sterling is a Racist: All the Memes You Need to See