Joseph Robert Wilcox was in the checkout line at a Las Vegas Walmart Sunday when cops say Jerad Miller entered the store, fired a single shot and yelled for everyone to get out of the store.

Wilcox, carrying a concealed handgun, decided to act. Fearing the worst about Wilcox’s intentions, Wilcox walked toward Miller, prepared to shoot him and potentially save a number of lives.

Miller’s wife, Amanda, who was nearby pushing a shopping cart after she and Jerad had ambushed two police officers in a nearby pizza place, shot Wilcox dead before he could act. Cops soon arrived and cornered the Millers, and Amanda Miller shot her husband before killing herself.

It’s not clear what would have happened had Wilcox not approached Jerad Miller, but Wilcox, 31, is being hailed as a hero who acted selflessly to save others.

1. He Confronted Jerad Miller After Miller Fired a Shot

When Jerad Miller entered Walmart on North Nellis Boulevard, Wilcox was there, returning an internet modem.

After Jerod shot a round in the air and ordered an evacuation of the premises, Wilcox approached him from behind.

According to the Las Vegas Review Journal, the Millers had a “small arsenal and survivalist gear” when they entered.

2. He Was Legally Carrying a Concealed Handgun

Mother of #walmartshooting victim Joseph Wilcox in tears. Says she wants to wake up her son and bring him home @KTNV pic.twitter.com/paSg1cQAWX

Wilcox was carrying a concealed weapon, for which he had a permit.

His uncle, John Wilson, told the Las Vegas Review Journal that, “He wasn’t political. But he definitely believed in the right to bear arms and the right to defend yourself and others.”

His mother, Debra Wilcox, called her son “very protective of other people.” She told the Las Vegas Review Journal, “Only 10 out of 100 times he would take it (his gun) with him. I don’t know why he took it with him yesterday.”

He was unaware that Amanda Miller, who was pushing a shopping cart at the time, was with Jerad.

3. Amanda Miller Came up From Behind Him & Shot Him in the Ribs

PHOTO: Family of Joseph Wilcox, man killed by couple inside Walmart, passed this pic of him. http://t.co/69CTjvuvUu pic.twitter.com/aDuW04dsSK

As he was attempting to stop Jerad, Amanda came up behind him and shot him in the ribs.

She then shot her husband and killed herself.

Police confirmed that Wilcox died without ever having used his gun.

4. He Had Applied to Be a Las Vegas Cop

A police officer told Las Vegas Review Journal, “This guy (Wilcox) was not some idiot with a gun. To me, he was a hero. He was trying to stop an active shooter.”

At the time of his death, he was not employed, but looking for work as a web designer.

Ironically, Wilcox had applied to the Metropolitan Police Department a few years earlier, but didn’t get accepted.

The slain officers were 32-year-old Igor Soldo and 42-year-old Alyn Beck.
The cops were having lunch at Cici’s when the couple opened fire.

According to the Las Vegas Review Journal one of the shooters said, “This is the start of a revolution” before killing them. 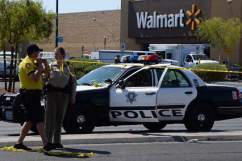 Las Vegas Shooting: The Photos You Need to See