Just two months after the shooting of unarmed black teen Michael Brown in Ferguson, Missouri, his killer, Darren Wilson, got married to a woman nearly 10 years older than he named Barbara Spradling.

Here’s what you need to know about the happy couple:

1. The Couple Haven’t Been Seen Near Their Home Since the Shooting

The couple own a home together in Crestwood, Missouri, about 20 miles south of Ferguson.

The St. Louis Post-Dispatch reports that they bought the home together in October 2013. It adds that they hadn’t been seen in the area around Crestwood since the Michael Brown shooting. Spradling’s last activities on Pinterest center around wedding ideas and ideas for a baby room.

A pro-Darren Wilson supporter in the streets of Ferguson. (Getty)

Like Wilson, she’s a cop in the Ferguson police department. The New York Times reports that in 2012, she received a medal of valor for her work. She’s a native of Imperial, Missouri.

3. Anonymous Claim She Has Strong Links to the KKK

In a video published on November 20 (above), hacktivist group Anonymous claims that Spradling has strong links to the KKK, more specifically Imperial Wizard, Frank Ancona. Speaking to the New York Daily News on November 17, Ancona was speaking out against Anonymous over the group’s hacking of a KKK Twitter account.

The KKK circulated this warning to protesters seeking justice for Michael Brown.

4. She Called the Story Put Forward by Michael Brown’s Supporters a ‘Lie’

The Guardian reported in August 2014 that Spradling told a friend that Brown had started the altercation that led to the death of the teenager. Spradling’s friend told the Guardian that Barbara thinks narrative around the shooting is a “lie.” Spradling also allegedly told her friend that Brown’s last words were not “don’t shoot.”

5. This Is Wilson’s Second Marriage

Since the shooting of Michael Brown in August 2014, Officer Wilson has been on paid leave. The St. Louis Post-Dispatch reported that Wilson’s salary was just over $45,000.

A source told the New York Times that the couple didn’t get married in Missouri. The Washington Post reported in August 2014 that Wilson divorced from a woman named Ashley Nicole Wilson in November 2013. 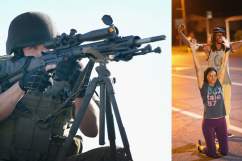