Jared Fogle attends the premiere of Disney’s “Muppets Most Wanted” at the El Capitan Theatre on March 11, 2014 in Hollywood. (Getty)

Jared Fogle, whose Indiana home was raided in July 2015 by the FBI as part of a child pornography investigation, turned a dramatic weight loss into millions of dollars in dough by becoming Subway’s top pitchman.

Fogle has admitted to possession of child pornography and to traveling to New York City to pay to have sex with teen girls who were being exploited in prostitution. Read more about Fogle’s case here.

Fogle, 37, has an estimated net worth of $15 million, according to CelebrityNetWorth.com.

Federal prosecutors said his wealth and ability to travel for work helped him in his exploitation of child prostitutes. Fogle will be required to pay $100,000 to each of the 14 victims in his case, according to prosecutors.

Fogle was sentenced to 15 years and 6 months in prison on November 19, 2015. Read more about his sentence here.

Fogle weighed 425 pounds as a 22-year-old student at Indiana University in 1998. By 1999, thanks to a diet based around Subway’s food and an exercise regimen, Fogle was down to 180 pounds. His story gained national attention, and he became Subway’s spokesman in 2000.

Here’s what you need to know about Fogle’s net worth:

Fogle has made hundreds of commercials for Subway since he became the company’s top spokesman in 2000. He has also traveled around the country making appearances for the sandwich shop chain.

He told QSR Magazine that he wouldn’t disclose his salary, but “they don’t pay me all in subs.”

He told the New York Daily News, “I owe a lot to Subway. They’ve given me an amazing life in multiple ways,” but wouldn’t disclose their deal.

Fogle was a student at Indiana University when he began working for Subway, and his role as spokesman has been his only adult job. 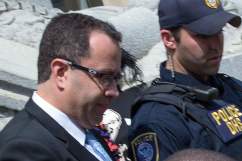 Jared Fogle Sentence: How Many Years Will He Serve in Prison?

2. He Also Made Money Through Motivational Speaking

In addition to his work for Subway, Fogle travels around the country as a motivational speaker. He earns between $5,000 to $10,000 per appearance, USA Today reported.

Fogle gives four different speeches titled: “The New You,” “The Saga of the Subway Guy,” “Having the Will to Stand On My Own Two Feet, Again” and “Moderation & the Smart Choices We Make,” according to the American Program Bureau website, which took down Fogle’s page Tuesday morning after news of the FBI raid on his home.

3. He Started a Charity to Fight Childhood Obesity

Fogle is also the founder of the Jared Foundation, which fights, and raises awareness about, childhood obesity.

Fogle says on the website, “Childhood obesity is a growing epidemic. I believe there is a solution; educating kids about the importance of proper nutrition and physical activity. I am proud to have my name on this foundation. Its vision and mine is to eliminate childhood obesity.”

Fogle did not earn any compensation from the charity, according to its 2013 990-EZ tax form.

Fogle’s Zionsville, Indiana, home is assessed at $536,000, according to Boone County records.

McLaughlin, currently his wife, said she plans to file for divorce.

5. He Wrote an Autobiography & Had Plans for a Second Book Targeted Toward Children

Fogle authored an autobiography called Jared, the Subway Guy: Winning Through Losing: 13 Lessons for Turning Your Life Around, which was published in 2006.

He also told USA Today in 2013 that he had plans for a second book, targeted toward children, though it has not yet been published.

Loading more stories
wpDiscuz
16
0
Would love your thoughts, please comment.x
()
x
| Reply
Jared Fogle, the Subway spokesman who lost more than 200 pounds on a diet based on the chain's food, is worth millions. Here's a breakdown of his net worth.