The grandson of one of the biggest stars on Oprah’s network was shot and killed in St. Louis while he was laying down a rap track. Police in St. Louis say that 21-year-old Andre Montgomery was found dead inside of a home in the city on the night of March 14. He made regular appearances on his grandmother’s show, Welcome to Sweetie Pie’s on OWN. The show deals with Miss Robbie Montgomery, the owner and operator of several soul food restaurants, Sweetie Pie’s. She was Andre’s grandmother.

1. Miss Robbie Believes Her Grandson Was Set Up to be Killed

Miss Robbie told TMZ that the house where Andrew was shot also serves as a recording studio. She says he was there laying down a rap track. While recording, he got a call from someone telling him to go outside, that’s when he got shot, according to the gossip site. The shooting happened on the 3900 block of Natural Bridge in north St. Louis at around 8 p.m. on March 16, reports the St. Louis American. He was pronounced dead at the scene.

Several posts on Andre’s Facebook show him with guns, weed, and making fun of Crips gangs in St. Louis. 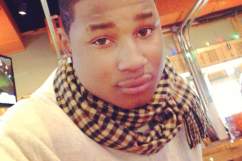 2. Someone Stole Andre’s Belongings From a Hotel Room After He Was Killed

Fox St. Louis reports that there are no suspects in the case right now. The station adds that another man, so far unnamed, was also shot and is in critical condition at a city hospital. The second person, a friend of the reality star, was not shot by Andre’s killers but rather by someone who just arrived on the scene and was trying to help.

Miss Robbie told TMZ that police do have a lead in the case relating a hotel room that Andre was staying at the time of his death. She says that on the morning of March 15, someone used a keycard to get into the room and stole Andre’s things. That suspect was captured on surveillance footage.

According to his Facebook page, he just returned from a visit to Lubbock, Texas, prior to being killed.

3. Andre’s Father, Andre Senior, Was Killed in a Gangland Attack

His grandmother’s eldest son was Andre’s father, Andre Senior, he was killed when his son was a baby in 1997, according to a bio for Robbie Montgomery. That biography reads, “For her that was the worst thing that could ever have happened. Although that hurt her very badly, she knew in her heart that she had to move on. She decided she would open a restaurant.”

One episode, showed Robbie and Andre visiting Andre Senior’s grave. In that clip, which you can watch above, she describes her son as “rebellious” while saying that he didn’t like the lifestyle that she had created for him.

The Jet Magazine piece notes that, “[Andre’s] late father fell victim to street violence and high-school student Andre moved to St. Louis to escape negative influences and to get his life on track.”

The St. Louis American reports that Andre became a frequent member of his grandmother’s show after moving to Missouri from Texas as a teenager.

He spent his teenage years in the Florissant neighborhood of the city. During his time in Texas, he attended Estacado High School. On his Facebook page, Andre says he’s a native of New Orleans.

4. After Moving in With His Grandmother, Andre Struggled in High School but Still Graduated

His high school graduation in 2013 was featured prominently in his grandmother’s show. In a 2012 interview with Jet Magazine, Robbie said about her grandson, “He’s still struggling in school. We put him into a different type of program where he can get more one-on-one help. He’s embarrassed about it, but we’re trying to let him know that we’re his family and we’re here to support him.”

One review of the show took aim at Andre’s constant joking on the show saying:

Andre is on straight joke time and always tries to diffuse a situation with a joke- I think this is a dangerous thing for a black man living in these here United States.

Everything ain’t funny. And he needs to learn how act to right – especially with those in authority.

He is always snickering and making light of things and that just doesn’t sit well with me.

In one episode of the show dealing with the restaurant’s owners balloting customers about who should be the new face of the brand, Andre was found to be unfairly influencing voters.

Posts on his Facebook page indicate that Andre is survived by a 5-year-old son.

In the 1960s and 70s, she had been a backup singer for Ike and Tina Turner. During which time she worked with singer Art Lassiter, who also sang with Ike and Tina. Robbie told St. Louis Magazine that she had a child with Lassiter. According to the book, “The People’s Place,” that son was Andre Senior.

Miss Robbie’s other son, Tim, who features prominently in the show as a manager of her brand, spent 10 years in prison for armed robbery. His rehabilitation led to his mother’s policy of giving ex-cons a second chance, according to a feature by the St. Louis Post-Disptach.

Read More
5 Fast Facts, Breaking News, Celebrities, Shooting
The grandson of one of the biggest stars on Oprah's network was shot and killed in St. Louis while he was laying down a rap track.