Henry Brown, pictured with his wife, Chericia Brown, and one of his children. The quote above is from a court filing written by Chericia, asking for protection from her husband. (Facebook)

A Florida man who threatened to kill his estranged wife when she wasn’t expecting it ambushed and stabbed her as she left the Chili’s restaurant where she worked Sunday night, before killing himself and the couple’s two young children, police say.

Henry Ramone Brown, 30, attacked Chericia Brown, 31, in the parking lot of the Lake Mary restaurant, before fleeing the scene, the Seminole County Sheriff’s Office said in a press release.

After picking up his children, Henry Brown went to the hospital where his wife had been taken, the sheriff’s office said. He tried to enter, but was stopped by witnesses and security, so he opened fire, but did not hit anyone. He fled from that scene and was later chased by police on Interstate 4.

Henry Brown, of Orlando, then fatally shot himself after police used stop sticks to blow out his tires during a pursuit. His children, Henry IV, 4, and Aleah, 1, were also found dead in the vehicle. Chericia Brown died of her injuries at the hospital.

1. Chericia Brown Told Police Her Husband Threatened to Kill Her, Saying ‘You Won’t Even Know It’ Was Coming

Chericia Brown told Altamonte Springs Police in December 2015 that Henry Brown had abused her and later filed a civil injunction against him, claiming he had threatened to kill her. Henry Brown was not arrested, but a domestic violence injunction was issued by a judge.

“This was a marriage that had gone wrong somewhere in December of last year,” Seminole County Chief Deputy Dennis Lemma told WOFL-TV. “A domestic battery was reported in the Altamonte Springs jurisdiction; ultimately an injunction was filed by Ms. Brown. An injunction was issued in January of this year and the relationship was rocky ever since.”

According to WomensLaw.org, a domestic violence injunction is a protective order “that orders the abuser to stop doing certain acts (such as abusing you, contacting you or coming near you) and makes the abuser do other acts (such as leaving your home, and paying you temporary child support).”

In the injunction, she asked the judge to let her keep her children, but said her husband could have unsupervised visits.

In her hand-written statement filed with the injunction request, Chericia Brown said her husband once whispered to her “if you take my kids away … I will personally kill you. One day you leave your job or walk down the street. You won’t even know it.”

The injunction came after Chericia Brown told police in December that during a fight her husband pulled her hair, slammed her head into a wall and tried to shove her sock into her mouth, the Orlando Sentinel reports. She also told police he had a pistol.

According to records obtained by the Sentinel, Altamonte Springs Police didn’t arrest Brown because of a lack of physical evidence and inconsistent statements. The officer said Chericia Brown’s injuries, a small cut on the bottom of her left lip, didn’t match up to her claims. The officer also said in his report that Henry Brown said she made up the story because she had found out he was having an affair.

“Due to the fact that victim C. Brown will not be returning to the home and has not returned in 48 hours, the fear of further violence does not exist,” the report states, according to the Sentinel.

In February, prosecutors declined to file charges against Henry Brown.

2. Brown Hid in His Wife’s Trunk & Ambushed Her as She Left Work

Henry Ramone Brown hid in the trunk of his wife’s car while waiting for her to leave work at the Chili’s restaurant, the Seminole County Sheriff’s Office said in a press release.

At about 10 p.m., Chericia Brown exited the restaurant. Her estranged husband stabbed her in the parking lot as she walked to her car, the sheriff’s office said. Two people came to Chericia Brown’s aid, and Henry Brown then returned, running his wife over with his car and also striking the two Good Samaritans, police said.

Both Good Samaritans were also injured. One remained hospitalized Monday night and the other was released after receiving treatment.

3. He Killed His 2 Children After Picking Them Up From a Babysitter, Police Say

Henry Brown, his wife, Chericia Brown, and their two children in a 2014 photo. (Facebook)

Henry Brown fled from the restaurant after attacking Chericia Brown, the Seminole County Sheriff’s Office said in the press release.

He went to an Altamonte Springs apartment complex, changed vehicles and picked up his two children, a 4-year-old boy, also named Henry, and a 1-year-old girl, from a babysitter, the sheriff’s office said.

Henry Brown then drove to the Central Florida Regional Hospital in Sanford to find his wounded wife.

“There, Seminole County Sheriff’s deputies and Sanford police officers confronted him. Brown
fired at the officers as he ran out of the hospital and they returned fire. No one was hit or injured during the exchange,” the sheriff’s office said.

He fled again, this time being chased by police on Interstate 4. Deputies used a stop stick to damage his tires and slow down the car. Deputies said they found Henry Brown and his children dead inside the car.

“Investigators believe Brown killed his children at some point after picking them up, and then committed suicide in his vehicle as law enforcement prepared to apprehend him,” the sheriff’s office said.

4. Henry Brown Fled From Police in November After a Traffic Stop on the Same Day His Wife Found Out He Was Having an Affair, Records Show

Chericia Brown posted this photo of her children in December 2015. (Facebook)

Henry Brown was arrested by Orange County sheriff’s deputies in November 2015 on charges of fleeing and attempting to elude a police office and refusal to obey police, according to the Orlando Sentinel.

The arrest came on the same day his wife said he found out he was having an affair, according to court records.

Henry Brown was stopped by police for driving 42 mph in a 20 mph school zone, the Sentinel reports. He told police he needed to go to an “important” family meeting to “save the family home,” the newspaper reports, and then drove off.

He eventually stopped and was arrested.

5. Henry & Chericia Brown Both Studied at Trinity Baptist College in Jacksonville & Were Married in 2012

Both Henry and Cheirica Brown studied at Trinity Baptist College in Jacksonville, Florida, according to their Facebook pages.

They were engaged in 2011 and married a year later.

Chericia Brown, whose maiden name was Jim, was originally from Chinle, Arizona. 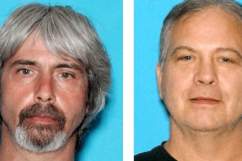 Loading more stories
wpDiscuz
8
0
Would love your thoughts, please comment.x
()
x
| Reply
Henry Ramone Brown stabbed his wife, Chericia Brown, at a Florida Chili's where she worked, before killing himself and their two kids, police say.