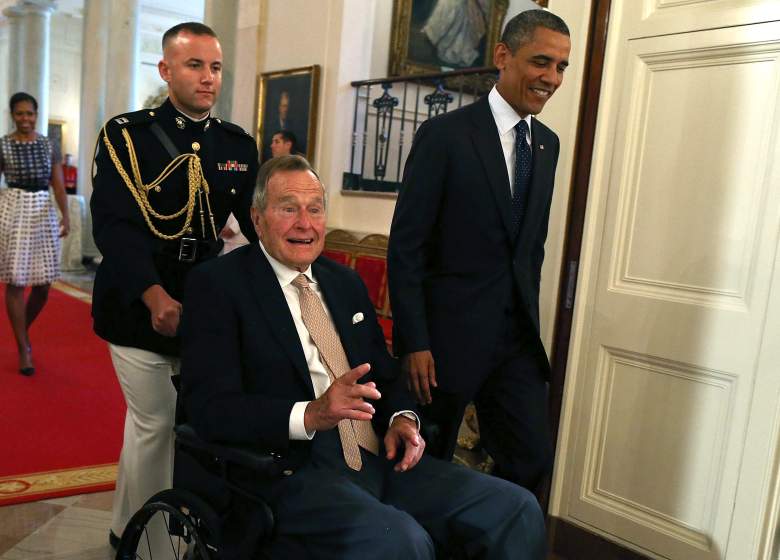 Former U.S. President George H. W. Bush sits in a wheelchair as U.S. President Barack Obama (R) escorts him into the East Room during an event at the White House, July 15, 2013 in Washington, DC. (Getty)

Former President George H.W. Bush currently uses either a wheelchair or a motorized scooter from the effects of Vascular Parkinsonism. It’s not a “true” Parkinson’s, in that it’s not caused by the same thing as typical Parkinson’s. However, the effects can be also be very difficult.

Parkinson’s disease is caused by the progressive deterioration of nerve cells in the brain. This is often caused by the loss of neurons that produce dopamine. As dopamine decreases in the brain, the signs of Parkinson’s emerge, according to the Mayo Clinic. What causes the neuron damage, however, isn’t known. Scientists think that several factors may contribute, including rare genetic mutations, environmental triggers, and Lewy bodies in the brain. Degeneration is not stopped completely, but medicine can help slow it down or at least temporarily relieve some of the symptoms.

With Vascular Parkinsonism, doctors are far more clear about the cause of the degeneration. Vascular Parkinsonism is caused by a series of small strokes in the basal ganglia area of the brain and can lead to slow movements, tremors, difficulty walking, and stiffness. Whether there is continued degeneration tends to depend on if the patient suffers additional small strokes. Physical therapy and finding ways to reduce the risk of more strokes can help. Because the cause is different, it doesn’t respond to typical Parkinson’s medications. Also, symptoms tend to be worse with the lower part of the body.

Dr. Alberto Espay of the University of Cincinnati’s Gardner Neuroscience Institute told Fox News: “They look like Parkinson’s from the waist down. From the waist up, they look very expressive.”