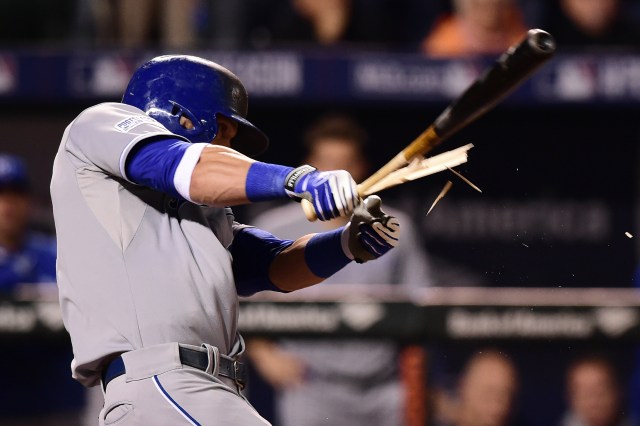 If you’re gonna break your bat, you should at least make it count. Kansas City Royals’ left fielder Alex Gordon, who hit .300 in the ALDS against the Angels, continued his solid hitting when a Chris Tillman fastball broke Gordon’s bat on the swing. Miraculously, the ball managed to stay fair, and after an error by Orioles second baseman Jonathan Schoop, Gordon cleared the bases and ended up on third. Combined with the inning’s earlier home run by Alcides Escobar, the hit gave the Royals a 4-0 lead.

Update: Gordon had quite the third inning. After his incredible double, he put a stop to an Orioles rally in the bottom of the third. The Orioles had cut the Royals’ lead to 4-1, but Gordon made a diving catch in left to rob Steve Pearce of a hit and end the inning. Watch here:

Read More
Baseball, MLB
Watch as Alex Gordon breaks his bat and drives in three runs and then makes a diving catch for the Royals in Game 1 of the ALCS.