Jakob Poeltl #42 of the Utah Utes controls the ball against Ty Charles #4 of the Stephen F. Austin Lumberjacks in the first half during the second round of the 2015 NCAA Men’s Basketball Tournament at Moda Center on March 19, 2015 in Portland, Oregon. (Getty)

Utah clamped down on defense to withstand a furious run by the upset-minded Stephen F. Austin Lumberjacks to advance in the NCAA Tournament. The Utes will face the winner of the No. 4 Georgetown vs. No. 13 Eastern Washington game on Saturday.

Jakob Poeltl led the way for Utah with 18 points, 8 rebounds and 5 blocks. Thomas Walkup scored 12 points and had 9 rebounds and 5 assists in a losing effort for the Lumberjacks.

Click here for the final boxscore and see a recap below underway:

Down by four, Dallas Cameron missed a 3-pointer with 20 seconds left in the game that would have cut the score to one. Utah then sealed the game with free throws.

Two free throws by senior Delon Wright increased Utah’s lead to 54-50 with 31 seconds left in the game after Stephen F. Austin stormed back to cut the lead to one possession in the final minute.

A 3-pointer by Ty Charles had brought the Lumberjacks to within 52-49 with 1:30 left in the game. After a Brandon Taylor turnover by Utah and a Jordan Loveridge foul, Trey Pinkney hit one of two free throws to cut the lead to 52-50 with 40 seconds left.

Utah went on a 7-minute scoreless drought allowing the Lumberjacks back into the game until Jakob Poeltl hit a big layup to bring Utah’s lead to 50-44 with 2:24 left in the game.

Poeltl Takes Over Inside

Jakob Poeltl scored 7 points over a six-minute stretch to help the Utes to a 41-31 lead with 9:22 left in the game. Poeltl had 14 points, 6 rebounds and 4 blocks over the first 30 minutes of the game.

The Stephen F. Austin Lumberjacks mascot performs during the second half. (Getty)

Stephen F. Austin started the second half on a roll, scoring the first six points to cut the Utah lead down to 26-25. But a 3-pointer by Jordan Loveridge and a steal by Brandon Taylor leading to a Jakob Poeltl fast-break layup put the Utes back ahead 31-25 with 16:20 left in the half.

The two teams traded baskets over the next four minutes, with Utah holding onto 35-29 lead with 11:37 left in the half in a defensive contest more suited to the Utes style than the high-scoring Lumberjacks.

Utah’s bench celebrates after a made shot. (Getty)

Brekkott Chapman #0 of the Utah Utes reacts with his team in the first half against the Stephen F. Austin Lumberjacks, (Getty)

Utah held Stephen F. Austin, one of the nation’s most prolific offensive teams, to the Lumberjacks lowest scoring first half of the season, 19 points. Utah, meanwhile, shot 50 percent from the field to take the 26-19 lead into the break.

Dakarai Tucker led all scorers with 9 points on three 3-pointers for Utah. His teammate, forward Jakob Poeltl, dominated inside with 3 blocks, 4 points and 4 rebounds.

Guard Ty Charles was the high scorer for the Lumberjacks with 6 points. Stephen F. Austin shot just 33 percent from the field as a team and went cold down the stretch, allowing Utah to open an 11-point lead with 1:13 left in the half. A 4-0 spurt by the Lumberjacks cut the lead down to single digits heading into the break.

An 8-0 run over four minutes, sparked by tight defense and sharpshooting from long range, put Utah ahead 24-15 with 3:53 left in the half. The Utes shot 62.5 percent from the field over the first 16 minutes of the game and on the defensive end forced five turnovers while Jakob Poeltl blocked three shots.

A Loveridge 3-pointer opened up the largest lead of the night for the Utes, nine points.

Wright put the Utes up 16-10, their largest lead, with a big dunk. But the Lumberjacks battled back, with Warren hitting his second 3-pointer of the night.

Utah started off the game 4-0, shutting out the Lumberjacks until Ty Warren hit a 3-pointer to put Stephen F. Austin on the board with 16:44 left in the first half.

The Lumberjacks held their first lead at 5-4 with 15:13 left, but Utah’s Jakob Poeltl dunked to give the Utes the lead back. After a jumper by SFU’s Clide Geffard, Dakarai Tucker answered with a 3-pointer, giving Utah the lead right back. Tucker hit a second 3-pointer to put Utah up 12-7, but the Lumberjacks answered with a 3-pointer by Demetrious Floyd. A Jordan Loveridge layup put the Utes back up by four, 14-10, with 10:23 left in the half. 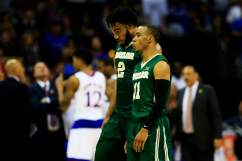