Jamaal Charles looks to have suffered a serious injury against the Chicago Bears. There is no word on his long term status but judging by the highlights he looks to be missing extended time. NFL Network’s Ian Rapport is reporting that the Chiefs fear he has a torn ACL. He has already been ruled out for the rest of the game against the Chiefs.

If Charles misses time, who is the next player up for the Chiefs? Charcandrick West received the majority of the carries when Charles went out. He finished the game with 7 carries for 31 yards.

West is a relatively unknown player. West is in his second NFL season and played at Abilene Christian, a small school in Texas. He is originally from Shreveport, Louisiana. He was signed by the Chiefs as an undrafted free agent.

He saw his first action of the season last week against the Bengals. West had 5 carries for 17 yards against Cincinnati. In limited action, he has not looked amazing. West’s play definitely leaves the door open to another Chiefs running back.

Knile Davis is another name to watch. Davis and West could split carries if Charles misses extended time. Both players are worth adds in any league.

The Chiefs depth chart does list Knile Davis in front of Charcandrick West. West received the carries against the Bears in Charles absence but it is worth monitoring how the Chiefs divide the workload moving forward.

According to RotoViz, he is blazing fast. During the pre-draft period two years ago, he clocked an unofficial 40-yard dash time of 4.27 seconds.

Here was some of Twitter’s reaction to the news:

The immediate fear is that #Chiefs RB Jamaal Charles tore his ACL, source says, based on initial tests. He'll have an MRI to learn more.

Jamaal Charles OUT, and apparently Charcandrick West is the backup, not Knile Davis #Chiefs #fantasyfootball

I'm hoping the best for Jamaal, but thinking the worst… https://t.co/tc1J8cz7V6

Charcandrick West, not Knile Davis, is the Chiefs RB behind Jamaal Charles.

As of right now, Charcandrick West is the next guy up in KC and NOT Knile Davis, although those two could split the duties 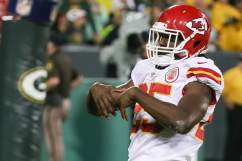 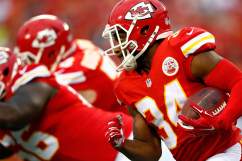