Laurent Koscielny is one of the few healthy players Arsene Wenger has left. (Getty)

Arsenal has a chance to finish Sunday at the top of the table, but to do so they’ll need a win in the north London derby against Tottenham Hotspur. Arsenal holds 25 points through eleven matches, tied for the league atop the English Premier League standings.

The Gunners are perhaps the hottest team in the EPL heading into the latest international break. With a win Sunday, Arsenal would notch it’s seventh consecutive EPL victory. It won’t be an easy task against Spurs, who have lost just once in eleven EPL matches this season.

While Arsenal have climbed the table, the team’s top talent has been forced to the sidelines. The injury bug has bit the Gunners hard, and it wouldn’t be surprising if they dropped Sunday’s fixture. They’ll have to rely on Arsenal veterans Koscielny, Cazorla, and Giroud to power them through. 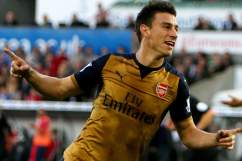 How to Watch Arsenal vs. Tottenham Live Stream Online