A new trailer has been released for the second season of the critically-acclaimed Netflix hit series Stranger Things during Super Bowl 51.

Opening with a vintage 1980s Eggo commercial, a reference to Eleven’s favorite breakfast choice, the 37-second shows the trio of pre-teens dressed in Ghostbusters gear while they are riding around town on their bicycles with the caption: “the world is turning upside down.”\

Lingering questions remain as fans speculate whether Barb’s death will see vengeance and if Chief Hopper will make good on his wish to punch people in the face.

Season 2 will arrive on Netflix later this year during Halloween 2017. 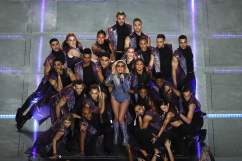