President Donald Trump sat down with CBS News’ Margaret Brennan for a wide-ranging interview ahead of today’s Super Bowl. The commander-in-chief is expected to discuss the government shutdown, his demand for increased funding for a border wall, and the Democratic field of candidates for the 2020 election.

The interview will air on Face the Nation on CBS, starting at 10:30 a.m. ET. More of it will air at 3:30 p.m. ET during the Super Bowl pregame show. If you don’t have cable or can’t get to a TV, you can watch it live on your computer, phone or streaming device via a free trial of one of the following cable-free, live-TV streaming services.

Note: With all of these options, you’ll be able to watch a live stream of both the Trump interview and the Super Bowl.

Once you’re signed up for both Amazon Prime and the CBS channel, you can then watch CBS live on your computer via the Amazon website, or you can watch on your phone (Android and iPhone compatible), tablet, Roku, Amazon Fire TV, Fire TV Stick, Xbox One, PlayStation 4 or other streaming device via the Amazon Video app.

CBS (available live in select markets, which you can find here) is one of 75-plus channels included in the main Fubo bundle.

You can start a free 7-day trial right here, and you can then watch a live stream of CBS on your computer via the FuboTV website, or on your phone (Android and iPhone supported), tablet, Roku, Apple TV, Amazon Fire TV, Chromecast or other supported device via the FuboTV app.

In addition to their extensive Netflix-like streaming library, Hulu now also offers a bundle of 50-plus live TV channels, including CBS (available live in select markets, which you can find here).

You can sign up for “Hulu with Live TV” right here, and you can then watch a live stream of the show on your computer via the Hulu website, or on your phone (Android and iPhone supported), tablet, Roku, Apple TV, Amazon Fire TV, Chromecast, Xbox One, PlayStation 4, Nintendo Switch, Echo Show or other streaming device via the Hulu app.

If you can’t watch live, “Hulu with Live TV” also comes with both its extensive on-demand library (which has most shows available after they air) and 50 hours of Cloud DVR storage (with the ability to upgrade to “Enhanced Cloud DVR,” which gives you 200 hours of DVR space and the ability to fast forward through commercials).

This service lets you watch a live stream of your local CBS channel, as well as all of CBS’ on-demand library. It’s ultimately the same as the Amazon Prime option, only you’re watching through CBS’ digital platform rather than Amazon’s.

You can start a free 7-day trial right here, and then you can watch CBS live on your computer via the CBS website, or on your phone (Android and iPhone compatible), tablet, Apple TV, Roku, Amazon Fire TV, Xbox One, PlayStation 4 or other streaming device via the CBS app.

WATCH: @SpeakerPelosi "doesn't mind human trafficking, or she wouldn't do this," accuses President Trump@margbrennan sat down with @realDonaldTrump for an interview airing Sunday on @FaceTheNation https://t.co/WNDyEQ2ta5 pic.twitter.com/Tl3Fk7Ew3p

President Trump spoke with Margaret Brennan, the moderator of Face the Nation on CBS News, for about an hour on February 1 in the White House Blue Room. CBS News released previews of their discussion, which covered a wide range of topics.

One of the issues discussed at length was the government shutdown. A bipartisan committee of lawmakers, with members from both the House and Senate, is working to reach a deal on border security. But if the committee cannot reach a compromise that Congress and the president can agree on, the government could shut down again on February 15. President Trump has suggested that he may declare a national emergency unless Democrats agree to fund a wall. In a transcript released February 3 by CBS News, Brennan asked, “Would you shut down the government again?” The president answered in part, “I don’t take anything off the table. I don’t like to take things off the table. It’s that alternative. It’s national emergency, it’s other things and you know there have been plenty of national emergencies called. And this really is an invasion of our country by human traffickers.”

Democrats have offered additional funds for border security, but the two sides have remained deadlocked about paying for the physical barrier the president wants. In the interview with Brennan, President Trump slammed House Speaker Nancy Pelosi, using language that suggests a bipartisan deal is unlikely. He accused her of wanting “open borders” and that she “doesn’t mind human trafficking.” The clip is embedded above. In response, Speaker Pelosi’s deputy chief of staff accused the president of “undermining” the compromise talks.

"In our conversation today, it's clear many of the things that [his intelligence chiefs] publicly presented as fact contradict the president's opinions," @margbrennan told @jeffglor

The president also addressed disagreements he has with the intelligence chiefs. Director of National Intelligence Dan Coats, CIA Director Gina Haspel, and FBI Director Christopher Wray testified before the Senate Intelligence Committee on January 29. They explained that ISIS remains a threat, that Iran is abiding by the terms of the nuclear agreement, and that North Korea is continuing efforts to build up its weapons arsenal. President Trump told Brennan that he does not always need to agree with his intelligence chiefs.

WATCH: "I know him. I don't think he has a chance," President Trump predicts of @CoryBooker's 2020 bid@margbrennan sat down with @realDonaldTrump for an interview airing Sunday on @FaceTheNation https://t.co/X1aIpxddud pic.twitter.com/lpyBK70Tyj

Brennan also asked the president his thoughts on the growing field of candidates vying to be the Democratic nominee in 2020. In a preview clip, President Trump said he thinks Senator Cory Booker has “no chance.” But he has expressed respect for Senator Kamala Harris. He told the New York Times that Senator Harris had a “better opening act than others” and inspired “better enthusiasm” from her crowds. You can read the full transcript released by CBS News here.

It has become a tradition for the president of the United States to give an interview ahead of the Super Bowl with a reporter from whichever network is broadcasting the game. President George W. Bush began the practice in 2004 when he sat down with sportscaster Jim Nantz. President Obama participated each year during his two terms. President Trump spoke with Bill O’Reilly in 2017 but did not participate in 2018 when NBC hosted the Super Bowl. 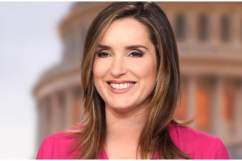