Patty Duke speaks during the Social Security Administration Reunites the cast of The Patty Duke Show press conference at the Paley Center for Media on March 23, 2010, in Beverly Hills, California. (Getty)

Oscar-winning actress Patty Duke has died at the age of 69, her family said in a statement to Fox Los Angeles.

She died of sepsis caused by a ruptured intestine, representatives told USA Today.

Duke died Tuesday morning at 1:20 a.m. at a hospital near her home in Coeur D’Alene, Idaho.

“This morning, our beloved wife, mother, matriarch and exquisite artist, humanitarian, and champion for mental health, Anna Patty Duke Pearce, closed her eyes, quieted her pain and ascended to a beautiful place,” her family said in a statement.

Patty Duke’s son, actor Sean Astin, told TMZ his mother’s passing comes as somewhat of a relief for her family, because she was in a lot of pain at the end of her life.

He told the New York Times there was “so much suffering” during the later years of her life:

This episode happened where her lower intestine basically ruptured and then there was septicemia. So she was alert and she was able to talk to the surgeons when she went in and that was a very good and healthy process. It was clear how serious it was. ‘This is a very, very sick woman,’ the doctor said and so everyone knew that it was a potentially fatal moment for her and she came out on the other side of the surgery … So from Thursday until this morning at 1:20 a.m (it) was a really, really, really hard process. It was hard for her, it was hard for the people who love her to help her, it was hard for the professionals.

She was hospitalized in 2014 with stomach pain, according to an Associated Press story for the time. She had a heart bypass in 2004.

She was also suffering from emphysema from years of smoking, Sean Astin said.

According to the Centers for Disease Control and Prevention, sepsis is “the body’s overwhelming and life-threatening response to an infection which can lead to tissue damage, organ failure, and death.”

A ruptured intestine, also called a gastrointestinal perforation, is “a hole that develops through the wall of the esophagus, stomach, small intestine, large bowel, rectum, or gallbladder. This condition is a medical emergency,” according to the National Institute of Health’s MedlinePlus.

It can be caused by illnesses including appendicitis, cancer, Crohn’s disease, diverticulitis, gallbladder disease, peptic ulcer disease and ulcerative colitis. The perforation can cause the contents of the intestines to “leak into the abdominal cavity,” causing a “serious infection.” Symptoms include severe abdominal pain, chills, fever, nausea and vomiting. It is often treated with surgery.

30 years ago today, Mike and I married. We having a very happy and quiet day. Love and hugs to all

Duke last tweeted on March 15, on the anniversary of her marriage to Michael Pearce. She also tweeted on March 1, “Hi tweethearts and FB friends. I have been absent, but not far, believe me. I love and miss you all. Hopefully back more soon and often.”

It's Mikes 61st Birthday. He is and always be my best friend, soul mate and love of my life. He's the best. pic.twitter.com/q7YBfmJcT8

Duke was diagnosed with bipolar disorder in 1982, according to the website Lifescript. She became an advocate for mental health.

Sean Astin continued his mother’s fight for mental health awareness after her death Tuesday, posting on the fundraising site Crowdrise, and asking for donations for the Patty Duke Mental Health Project. 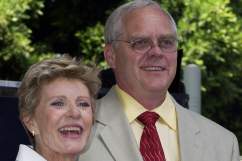 Read More
Breaking News, Celebrities, Deaths
Patty Duke, the Oscar-winning actress, has died at the age of 69, her family says.