Melania wanted to give the speech so she could show the world the softer, more personal side of Trump. She wanted to help voters get to know her husband better, CNN reported.  (Getty)

A journalist says Melania Trump may have plagiarized pieces of her Republican National Convention speech from a 2008 speech given by Michelle Obama. However, another person, Meredith McIver, an “in-house staff writer” at the Trump Organization, now says she was responsible.

On social media, many were giving Melania a pass for the possible plagiarism by saying a speechwriter must have let her down.

I feel genuinely bad for Melania. This is probably a staffer’s screw-up from an unprofessional campaign, and she’ll be humiliated over it.

However, a video surfaced of Melania Trump telling NBC’s Matt Lauer of her RNC speech: “I read once over it and that’s all because I wrote it with as little help as possible.”

The full interview between the Trumps and Lauer is scheduled for July 19.

Contrast this with the statement issued by Trump’s campaign after the furor ignited over the similarities. According to CBS, the statement from a Trump PR official, Jason Miller, reads, “In writing her beautiful speech, Melania’s team of writers took notes on her life’s inspirations, and in some instances included fragments that reflected her own thinking. Melania’s immigrant experience and love for America shone through in her speech, which made it such a success.”

Here’s the Tweet the journalist wrote starting the firestorm. Journalist Jarrett Hill pointed to a passage in the speeches of both Melania and Michelle Obama that outlined values shared with their husbands: 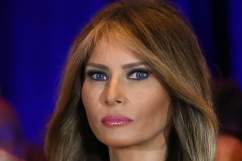 Trump had tweeted his pleasure over Melania’s talk before the plagiarism allegations surfaced; Melania’s talk was the centerpiece on the opening night of the Republican National Convention.

It was truly an honor to introduce my wife, Melania. Her speech and demeanor were absolutely incredible. Very proud! #GOPConvention

Before the plagiarism allegations surfaced, Melania’s talk was generally getting good reviews.