NJ.com reports that the investigation into Hyman began in May 2017, just before her academy graduation.

That description game from a gif (above) showing Hyman choking out a man. The description reads, ” No “Spooky Treatment” here just pure HORROR. After she’s through using her powerful arms, the belt comes out and she uses it to choke him to a real KO.” It concludes with:

What you’ll see in this video is not a sketch, not a preplanned film, and certainly not something I did for you or for anyone else. It was for me; and as a sadist, it was 100% for my own sexual gratification.

3. Hyman Wrote in a 2011 Blog Post About Her Disappointment at How America Celebrated the Death of Osama bin Laden

On her blog, which has been inactive since 2012, Hyman wrote that she was upset with out joyous Americans seemed to be at the death of Osama bin Laden. Hyman said:

I actually did feel sorrow over the death of OBL. Not over his actual death- but over the way we, as a society, could find the end of anyone’s life as a cause for celebration. Didn’t we all shake our heads and feel our stomachs turn when other people celebrated the 9/11 attacks and cheered and jeered in the streets?

When we do what we did, and react with joy to the execution of a human being (no matter how despicable), doesn’t it make us not only hypocrites, but supporters of the stereotypes propounded by those whose nations are already rife with anti-American sentiment?

One of Hyman’s final blog posts dealt with the fallout of Hurricane Sandy. She mentions that the power was out in her studio and that she was unable to get into the city.

4. Hyman Says as a Teenager She ‘Knew [She] Was a Dominant, a Sadist & a Fetishist’

I became interested in the scene at a very early age. I’d always had a desire to explore the options available to me outside of a traditional Boyfriend-Girlfriend relationship; as a teenager, I already KNEW I was a Dominant, a Sadist, and a Fetishist: it was only when I started attending fetish events that I realized there was a whole community of other women like myself.

In May 2012, Hyman uploaded a video of outtakes from one of her movies to YouTube.

5. Hyman Will Not Face Any Criminal Charges

Hyman will not face any criminal charges as a result of her career. NJ.com reports that Hyman was sworn as an officer on June 8. She will remain on modified duty until the investigation is concluded.

Hyman’s lawyer, James Lisa, told NJ.com that, “[Hyman] wants to be in law enforcement. The videos are clearly inflammatory, but there is nothing illegal.” The most severe punishment facing Hyman is termination from her job. 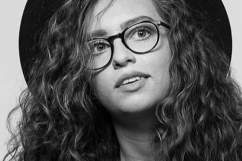