Indiana State Police Police in Indiana have released a sketch of the man they say killed two teen girls, Abigail Williams and Liberty German, in Delphi. He is seen at right in a photo taken from the cell phone of one of the victims.

Indiana State Police have released a composite sketch of the man believed to have killed two teen girls who disappeared in Delphi five months ago.

A sketch of a suspect n the murders of Abigail Williams/Liberty German if u have info call 844-459-5786 or email abbylibbytip@cacoshrf.com pic.twitter.com/6I551aQmpI

“The person depicted in the composite sketch is described as a white male between 5’6” to 5’10”, weighing 180 to 220 pounds, with reddish brown hair, eye color unknown. This sketch depicts a hat that may not be accurate. We ask that you focus on the person’s facial features,” Indiana State Police said on Monday, July 17.

“The composite drawing is the result of information received during the course of this ongoing investigation,” police said. “Anyone with information about the murders or the person depicted in the composite sketch should call the established tip line at 844-459-5786 and can remain anonymous. Tips may also be emailed to abbyandlibbytip@cacoshrf.com.”

Police have been searching for the suspect in the deaths of Abigail Williams, 14, and Liberty German, 13, since they vanished while walking on an abandoned railroad bridge. A reward of more than $230,000 is being offered for information that leads to the suspect’s arrest. Police previously released a photo of the suspect recovered from Liberty’s cell phone.

Libby German and Abby Williams were reported missing by their family on February 13. Hundreds of people, including police, firefighters, family, friends and residents of the surrounding community, searched for the girls into the night Monday and again Tuesday morning. Their bodies were found about 12:15 p.m. a day later.

“We feel this is very important because it actually gives a better view of the person in the picture that you see down below,” Sergeant Kim Riley said at a press conference, Fox 59 reports. “It shows a little more facial features it gives you a little more information on what we’re looking at, who the suspect might be, and that’s why we feel that it’s very important that this picture is out there at this time.”

Riley said it’s important for people to look at the facial features.

“We’ve got the information out there, the pictures out there, now we’ve got this composite that we feel it is the same person and we just want to make sure that people realize this picture is this person ,” Riley said.

Police also previously released audio recorded on Liberty’s phone in hopes of identifying the man they believe killed the girls.

The man can be heard in the brief audio clip saying what police believe to be “down the hill.” You can listen to the audio released by police, a six-second loop of that phrase, below:

Liberty had the presence of mind to turn on her cell phone before she was killed, according to police.

“This young lady is a hero,” Indiana State Police Sergeant Tony Slocum said at a press conference. “We are actively looking for this person. This person is our suspect.”

Investigators have recovered other video from the phone, but said they are not ready to release it. 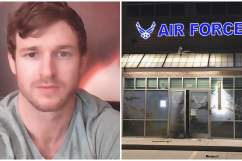 Loading more stories
wpDiscuz
5
0
Would love your thoughts, please comment.x
()
x
| Reply
Police in Indiana have released a sketch of the man who killed two girls, Abigail Williams and Liberty German, five months after the teens disappeared in Delphi.